I will always hold it against a movie that makes me think like a Cinemasins video. It puts me in a state of mind that is completely self-punishing. Film is an approximation of life, not life itself, no matter what Godard tries to tell me. So, when the logic of a movie is so banal and presented in front of me that I cannot possibly ignore it, I will hold it against that movie no matter what.

Teenage Mutant Ninja Turtles is the latest movie to challenge me like that and now I will fucking own its ass. Because there is almost nothing redeemable about its content.

And the filmmakers clearly tried to redeem their film by any means necessary. So many things about this movie seem like an effort to please everybody they possibly can. William Fichtner gets shooed out of the Shredder for not being Asian, when the actor is devious enough to play the villain and not second-banana. The Turtles are no longer aliens (I don’t give a shit about their origin story as an long die-hard TMNT fan – the ooze was of alien origin to begin with) after a fan backlash. They made the title back to Teenage Mutant Ninja Turtles (though I can’t help but note the logo’s stubborn emphasis on the words “Ninja Turtles” as if they didn’t want to give up the fight). They didn’t bother with the design of the turtles looking like the Jolly Green Giant’s Saibamen but they made a definite attempt to save the public image of the film under the (reasonably but still unfortunately) tarnished name of Michael Bay. 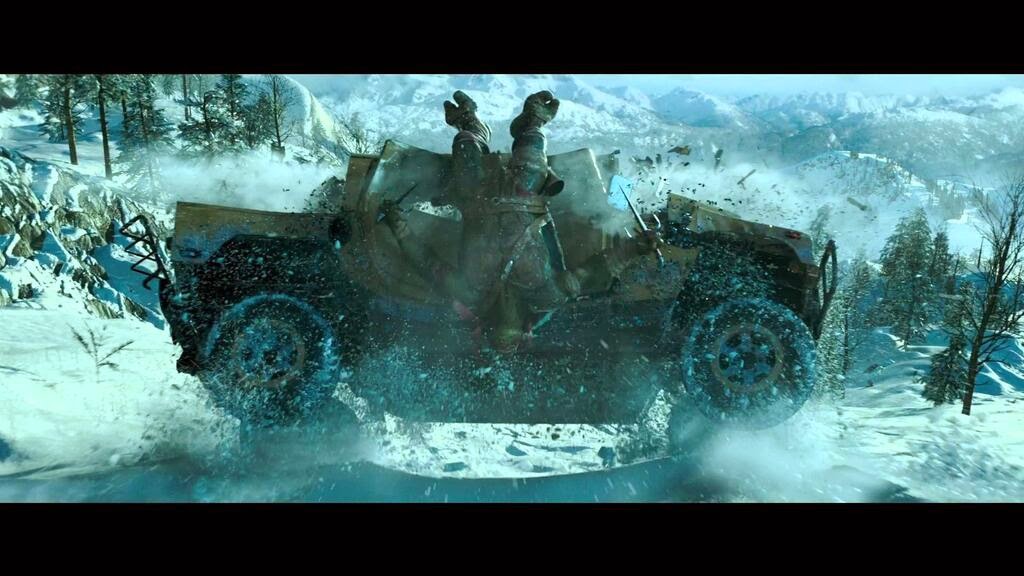 Michael Bay didn’t direct it, he was the producer. At this point, I don’t need to say that is the case. You all know that the actual director is the very unexciting name Jonathan Liebesman, whose last two films were similar CGI distraction-fests and the rest bargain bin horror/thrillers. Liebesman instead tried the Michael Bay style. A whole fucking lot. Lense flare galore, heavy over-editing and goddamned terrible lighting that goes between overexposure and a very unnecessary amount of darkness that literally divides the turtles away from the ninjas they fight or the humans we assume they interact with.

The movie’s quite unapologetic about its plotlessness, but I’ll try as best as I can sum it up: The closest we have to a protagonist to the film is April O’Neil (Megan Fox trying to put another nail in her coffin), a reporter tired of getting fluff pieces at her job that she begins pursuing the activities of the rising Foot Clan Crime Syndicate. In the middle of this she goes and captures her own eyewitness testimony to a vigilante interfering with Foot Clan activity, convincing no one. When she finally finds the identity of this now-team, she discovers them to be four teenage mutant ninjas. They’re also turtles. They’re also raised by a rat named Splinter (motion-captured by Danny Woodburn; thankfully not voice acted by the fucker but instead by Tony Shalhoub). They also are the middle of battle with a force known as Shredder (Tohoru Masamune). Shredder is himself using the technology of Eric Sachs (Fichtner in a scenery-chewing campability I previously did not know him capable of). It’s basically a sloppy load of events that are vaguely connected and slapped onto the screen to give circumstances for the Turtles to fight in a manner that doesn’t suit them.

If it sounds like I’m not into reviewing the film anymore, it’s because these guys involved with the movie weren’t into making it either. It’s a cash-in on a brand. Will Arnett and Whoopi Goldberg barely do anything in their respective roles than add to a sort of workroom sexism media bias vibe that would work if the movie was more aware of what it was presenting and wasn’t A FUCKING KID’S FLICK. Josh Appelbaum & Andre Nemec just provide a straight from The Amazing Spider-Man template for its scenes while adding unnecessary darkness. Y’know metaphorical darkness, not literal darkness like the design of the turtles’ lair and the handheld shots of bullshit battles in enclosed areas happen to be cover themselves with. And Liebesman and Fox together showed a cinematic incompetence I was not even fucking aware was capable when you try this hard. What can I say about Fox alone that hasn’t already been said and thought to have killed her career already?

To the film’s credit without trying to force myself to say nice things about it, they handled the characterizations of each turtle very well. Exceptionally well. Some might say the personas of the turtles were pushed to extremes (the usage of the thickest glasses ever created on Donatello is a bit much maybe), but I’d call the ability to differentiate between the four like that a great amount of pleasure. It definitely is a step up from the Transformers series where we literally can’t tell either robot from each other, during the action or after the fact. But it’s a small devotion to character that gets utterly drowned out in the end by completely uninvolved filmmaking.

But that’s it. The film has otherwise nothing going for it and y’know these characters belong in a film where something is given for them, because in a franchise spanning 5 movies and 24 years, it’s a shame the only movie to give them a world to live in was the animated CGI extended TV series episode from 2007 (and it wasn’t even a great movie as it was just worth watching). I mean, come on, children aren’t idiots. You can give them better stuff than this slog of a movie.