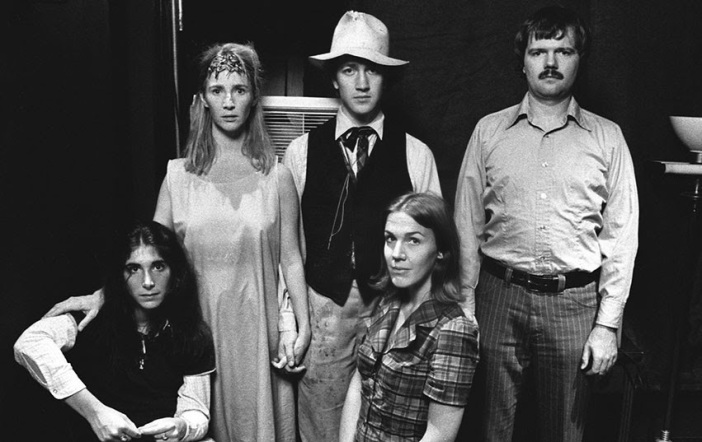 So, one of the unfortunate facts about Lynch’s art school career is how very short-lived it was. It was, in fact, so short-lived that the amount of artwork I could find documented online was a grand spanking total of zero. Of course, I could have not been working as hard in my search and if anybody actually comes across some form of his fine art for me to view and comment on, I gladly encourage sending them to me for later review. I’m especially disappointed by my inability to comment on his Boston and Philadelphia works from having just earlier seen National Gallery in the middle of a local art festival. It gets one a little bit excited to have some artwork he himself can apply himself to.

In the meantime, the show must go on.

You see, part of why Lynch’s early artistic interests were cut short was not from lack of enthusiasm but simply disapproval of his education during this time. He wasn’t enjoying his time at the School of Museum Fine Arts, Boston, and after one year of enrollment, dropped out to instead see Europe with his childhood friend – future Oscar-nominated Art Director Jack Fisk, whom we’ll get to know some more as we go on through Lynch’s life.

Except Europe only led to further disappointment for Lynch as the two of them expected being able to arrange themselves as pupils of Expressionist painter Oskar Kokoschka in Switzerland only to later discover that was not going to be possible and returning very quickly to the States with their tails tucked further between their legs.

After that brief spiel, Lynch got in contact with Fisk again – who was studying as the Pennsylvania Academy of the Fine Arts – and decided to join him there. Finding himself much more inspired in this environment, Lynch met his first wife Peggy Reavey, married her, and had a child with her – albeit all accounts on this assume that Lynch’s fatherhood was reluctant though not negligent.

It was during here – in his time in Philadelphia – that Lynch would get his first taste of a filmmaking project. Shooting a camera was not exactly new to him at this point, although there is nothing much to say about Sailing with Bushnell Keeler beyond its status as an interesting home video with a man who Lynch largely credits with supporting his later early film career and inspiring him. No, it’s not too disinteresting, but one can’t comment on it the same way that the Lumiere brothers’ records of the Parisien streets are interesting but there is nothing beyond the observational to state.

No, the true beginnings of Lynch’s film work comes out of…

Which is practically exactly how the hell it sounds, but permit me to be indulged for a moment as I talk about it.

The origins of this on making this happen to present itself to Lynch as the idea of having his paintings move and so it’s pretty obvious that the film itself is meant to exist in some amount as a form of experimental cinema and as a bit of abstract painting. It was in itself meant to be projected (and I believe was originally projected) on a sculpted screen with plasters for three of the six men faces we see in the short film. I wish I had a chance (maybe it will present itself in the future) to witness the film in this format as it seems essential to the experience, as though you’d be a lot more in the room with the characters and therefore their grievances are significantly more off-putting and alienating, even with the fourth dimension involvement.

Alongside this, there is the alarming presence of a nonstop emergency siren letting you know that the events you are about to witness are sure to be unmanageable and unnerving. It’s easy to make people tired of seeing the same thing six times (and the loop does feel especially lengthy, constantly giving the sense of a countdown to extinction for each of the six men showcased), but to make it disturbing and wretched… that takes some kind of personality bled into the screen.

It’s practically devoid of narrative (unless you count the looping of the imagery of men looking more and more ill to an explosive climax a narrative. I wouldn’t be against classifying it as such, but I’d take a lot of convincing). But the film itself does more than become a narrative. In the larger scale of Lynch’s career, it once again acts as a map to pinpoint how the hell his aesthetic and surreal sense works. His jagged linear usage, his dismissal of where the genesis of objects in his film begins and how they can end (one of these six men is outright vomited together by two men, if that makes any fucking sense), his assaultive splash of color but otherwise his dedication to grim darkness as the forefront to a dirty white background and sickening greens and pinks and blues that resemble bodily fluids of something you don’t expect to be anything but suffering.

In less than a minute, this loop can do a lot to disorient a viewer from his or her own well-being. It’s much impressive. But six times is too much and enough to make it play around in my head even further, so I’d like to move on.

Based on the success and reception of Six Men Getting Sick, Lynch ended up with a little more money behind to produce any short film he wished once again. That shortly turned sour as half of it was used on an attempted animated feature that ended up shot on a shitty print and so he decided – with his financier’s blessings – to move on to his first live-action short narrative film that would prove to be

Starring Lynch’s wife as the only live-action character on-screen, a pale blue sickly young woman who is bedridden the entire time, and inspired by the nightmares of the couple’s niece, HOLY FUCK IS THIS FOUR-MINUTE SHORT FILM BLOODY. Like, it will probably give a guy in his twenties nightmares. It’s not even gratuitous blood, per se, but the presence of its brightly makeup suddenly interrupting the bloated blue landscape of the short is what’ll send a shiver down the spines of its audience.

From what is described, the idea of the film is to provide a bit of a symbolic representation of the menstrual cycle of a woman and how deep inside there’s a constant foreboding danger to the body by its own self-harm, and I guess I can read that, but there’s something especially different I would point from my own perspective.

And that’s how recycled time on Earth can truly be. We spend most of our time asleep, all of it taking in futile information that seems as imperative to our living as the ABCs – obviously the letters of the alphabet are the biggest motif in the short – we spread our seed (the constant dots remind me of the seeds on the skin of a strawberry and the baby’s crying is just as much an unwelcome touch of the spine-tingling sound effect of the short as the siren for Six Men Getting Sick), and we fucking bleed it out.

Anyway, the short film, as you can expect was an extremely abstract work that came away from the storytelling device of “this is how the world works” or “this is something that happened” and devotes itself to instead just showing us some vaguely connected imagery that is still haunting and evocative in the same manner that a hideous ghastly claw grabbing us from under the bed is godawfully evocative.

And so, by that point on, the film bug had taken over Lynch and he decided to send his short film – which caused him minor celebrity – to the American Film Institute as well as a screenplay for what, pending their approval and grant for him to produce the script, would lead to Lynch’s final short film before he would begin production on his feature debut…

And at the length of 34 minutes, The Grandmother was clearly the first time Lynch would take to crafting a more straightforward narrative. Certainly the film itself had its own idiocyncracies, not least of which in the plot itself which follows a young child (Richard White) who is constantly and unbearably abused by his parents (Robert Chadwick and Virginia Maitland) in violent and terrifying household manners – from coddling to physical bullying, no form of terror is too small for this child.

So, said child begins spending his nights planting some seeds and hoping for a protector to come for him, which finally makes itself known in the form of what appears to be a kindly old woman (Dorothy McGinnis) grown out of the seeds planted.

It honestly feels like the closest Lynch will come to a Tim Burton film. Which is fine because I enjoy both aesthetics, although Lynch’s approach is hardly out of some nostalgia for the dark and certainly with the proper amount of exaggerated apprehensiveness. Every turn is at best a nightmare waiting to happen, at worst a furthering of the torture physical and mental to continue. Completely devoid of wonder.

I enjoy the darkened monochromatic film that Lynch uses – neither blue nor black but in that uncanny beeline right between those tones, like the child is waiting to die for his tortures to end and the entire families’ bloodless makeup surrounding their skin feels like the zombies of Night of the Living Dead and the parents’ actions don’t make them any less savage or the child’s behavior any less primitive. This is obviously just meant to broadly shape the characters for any overarching representation of the Nuclear family destroyed.

But what makes me happy to return to this short film, more than the garishness that shows how far gone Lynch’s attitudes had probably become upon the hardships of his early life, but what we also have is the remainder of Lynch’s artistic desires as there are constant animations and hexing arrangements of frame speeds to give the nocturnal tale more of a very disjointed incomplete feel, even though this is a completely tale being told. It’s fascinating, it pushes further the idea that these characters aren’t people so much as subjects to some hellish family drama, and it frankly looks unique. Like it is the stick figures (with elongated tail legs) that only Lynch could possibly create.

It was obviously a hit with the American Film Institute and others upon its completion, given how personal it hit (it was shot entirely in Lynch’s Los Angeles home) and how obvious Lynch was not only learning his craft but beginning to bleed his other talents into the work as well.

And based on his newfound relationship with the American Film Institute after their combined efforts to make The Grandmother materialize, Lynch decided the time had come to take a shot at the long draining mile into making a feature film…

… Gardenback… (hehe, you thought I was gonna say something else, didn’t ya, bitches?)

… which is where we will part once again. See you again very soon.