I’ve been an extremely late-comer to Don Hertzfeldt. In spite of his Oscar nomination in 1999 for Rejected and the constant acclaim he’s received as an independent animation darling, my introduction to his work literally came about, like, 2 years ago (2013) when I happened upon his 2010 short film Wisdom Teeth.

I liked it a lot. Enough to get my feet in the air kickin’, but it’s entirely the feature-length It’s Such a Beautiful Day that definitely made me a legitimate fan of Hertzfeldt and eager to approach all the other work he made in his career. I’m actually extremely bitter than between the year where both It’s Such a Beautiful Day and Silver Linings Playbook came out, it’s the mediocre latter film that has gotten all the rave about its portrayal of mental illness when a more honest film exists.

My main point behind this intro is that I am so fully in the bag for Don Hertzfeldt, you can tie it up and swing it around. So, it wasn’t so tough for me to decide to shell out the 4 bucks needed to rent his newest short film World of Tomorrow on vimeo-on-demand. Especially when it came out of winning his second Grand Jury Prize at Sundance earlier this year.

Hence, I may be biased, but I totally found that worth it. World of Tomorrow is a 16-minute short film so worth that time and money that I implore you to check it out as soon as you can. But, then again, I have to back it up, so that’s why we’re here.

Anyway, like you’d expect for Hertzfeldt, it is philosophically dense, avant-gardely wacky, and at points – surprising for Hertzfeldt on my end – unbearably adorable while becoming – unsurprisingly – nihilistic.

A message is caught by a young girl named Emily (voiced by Winona Mae) living in an undisclosed yet probably futuristic timeline. The message turns out to be from an extensively distant future where the deliverer immediately reveals herself to be one of many generational clones of Emily (this elder version is voiced by Julia Pott) and inviting Emily Prime to join her briefly in the future to discover the many apparent benefits of life there and the overall downside and depression inherent in future life.

And thus goes the movie’s ideology into fear, isolation, loneliness, progress, separation, and all that other anti-social things that astonishingly aren’t that far off from how humans like you and I act. Just as well a theme previously explored in It’s Such a Beautiful Day, but Hertzfeldt goes one further by now making World of Tomorrow weirdly alien to his usual viewers and even possibly to himself.

He does this simply by allowing World of Tomorrow to become his first digitally-animated work. And that actively gives off an inhuman gleam to most of the structures we witness in the future of World of Tomorrow, many of which are just lines of perfect geometry across a smooth colorful surface. We are meant to regard this as the “outernet” and how the majority of future citizens interact with each other (the short film never namedrops or even uses the term “Social Media” but I’m sure that’s one of the many technological advances that it observes as adding to this impersonability that the world of tomorrow encompasses). And yet the only people whom we ever physically live through this with is Emily Prime and Emily, arguably the same people. 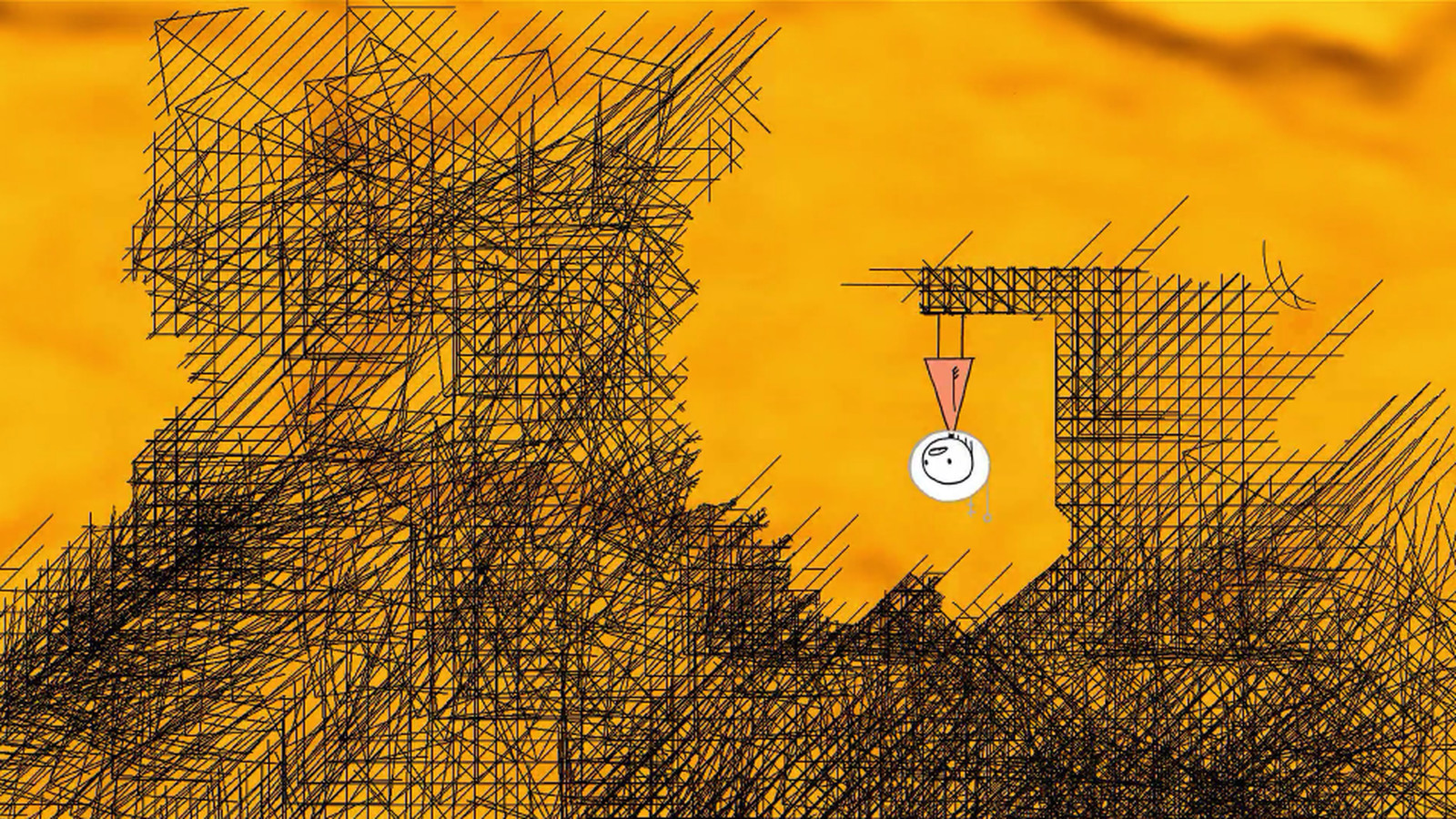 The Outernet is physically and objectively “better” as an environment but also less lifeless, especially with this short’s obsession with the past and memory used as a theme and its one-track-minded (and eventually futile) desperation for immortality. Something reflected on how the physical perfection of digital animation is making everything in Hertzfeldt’s film a lot more clearer but also reasonably less personable than the previous works of hand-drawn animation that had a lot more humanity and imperfection in them. A story like World of Tomorrow could only possibly be drawn with that kind of soulful sheen of digital animation from a vehemently independent animator like Hertzfeldt.

And yet there’s still the whole remaining fact that these people are the same usual stick figures Hertzfeldt draws, completely white and thin, taking almost no space of the usually blank screen in Hertzfeldt work – although in here, the figures are overwhelmed by color to especially Emily Prime’s delight.

Ah yes, I’ve been making this sound astonishingly dreary and dark and while some of the humor of the short film comes from that dreary darkness, it also comes from a facet I’ve neglected to mention up until this point. Winona Mae, the voice of Emily Prime, is Don Hertzfeldt’s niece. She has no voice acting experience up until this point. Naturally, for she is four years old.

The majority of Mae’s lines are near non-sequiters reacting to the unfortunate philosophy the clone Emily is conveying to her, only somewhat connected to what’s said or going on on screen. And it plays off wonderfully as both a relief that Emily Prime, who we can assume is also four, is not allowing her to be bothered by what Emily Prime states is the irreversible future of the world and also as a depressing thought that what the Emily clone has tried to explain to Emily Prime will go absolutely nowhere and both from the fact that a four-year-old child simply cannot register the gravity of what’s going on. And the things Emily Prime is enjoying about the Outernet are clearly things that the Emily clone has no interest in and is to distracted with isolating herself from a humanity that is, in effect, also isolating themselves from each other.

Emily Prime also, naturally, gets the best of the lines – My favorites are when she names out several colors in ecstasy of how it changes the Outernet and, after only three, claims she can’t remember any or how she lectures the Emily clone about “snakeboys”.

It also means that Hertzfeldt can be more direct with his themes here than with It’s Such a Beautiful Day, almost flat-out laying them out, though this makes It’s Such a Beautiful Day the work that ends up hitting a lot more harder for this. And the saddest part is that Hertzfeldt doesn’t blame anyone or anything but just observes that humankind has a natural tendency to drift away from each other and put up more screens and more technology in the middle of them. It’s not even a slightly angry short film, it’s just a pensive one, and a perhaps regretful one.

World of Tomorrow is a wonderful, dark, and overall fantastic experience to have for 16 minutes and I implore you to go and rent it from vimeo whenever you have the time. It’s certainly better than all the movies that are coming out this weekend.

And then, obviously, when you’re done… Go out a bit more. Interact. See people. I know that’s what I gotta do.

One thought on “Tomorrow Will Die”