But enough self-deprecation, for I have to admit something that I’m surprised most reviewers of The Avengers haven’t admit when they found they had to say something about the movie. An intellectual stop, you see – It is not impossible, but immensely hard to have to talk about a movie like The Avengers without acknowledging it more as an event than as a movie. If you were even the most casual fan of the Marvel Cinematic Universe – as I was and am – you still were expecting and looking to what was to come from this picture’s production and release: the final rung in the first phase of Marvel Studios’ attempt to establish their franchise as an outright parallel universe of superhero output to rival their extensive comic book work.

Begun from Iron Man and built upon bit by bit (or in the case of outright commercials for the universe like Iron Man 2, entire fucking movie after entire fucking movie), the Marvel Cinematic Universe had finally built up enough hype where even if The Avengers bombed, the plans wouldn’t exactly fall apart for the next few movies yet. Fat chance of it bombing, though, it didn’t and we’re at the tail end of Phase 2 as we speak with the long delayed Ant-Man to come out next month to wrap it up (now my new goal to complete these reviews). And even after coming so far, The Avengers is still thought of as the absolute centerpiece of the Marvel Cinematic Universe, where practically elements of every previous film – whether a villain or a hero or a plot point or a MacGuffin or a setting or so on – came together to make this bombastic action setpiece of a picture.

What exactly makes such an acknowledgement of The Avengers as more event than motion picture a bitch to write about?

Well, for one, the plot seems like a secondary factor to the spectacle of the film. It’s not entirely absent and it’s something I could totally recall: Thor’s adoptive brother, Loki (Tom Hiddleston) has surfaced on Earth to hijack the Tesseract – a highly powerful cosmic object then under S.H.I.E.L.D. custody – and use it to barter control of the Chitauri army for his personal conquest of Earth (I know a lot of love for Loki erupted most from his appearance in The Avengers rather than Thor, but I honestly think the former does a lot of damage to his previously well-written character). Col. Samuel L. Jackson (Nick Fury) arranges to have a superhero team waiting for Loki’s plan – National legend Steve Rogers/Captain America (Chris Evans), upstrung timebomb Dr. Bruce Banner/The Incredible Hulk (Mark Ruffalo, doing the best work with the character than any of his two predecessors), S.H.I.E.L.D. agent/former assassin Natasha Romanoff/Black Widow (Scarlett Johannsson), and genius playboy Robert Downey Jr./Iron Man (Tony Stark). Part of their mission includes rescuing fellow S.H.I.E.L.D. agent bow and arrow sharpshooter Clint Barton/Hawkeye (Jeremy Renner) and Norse God of Thunder Thor (Chris Hemsworth) tags along because “Goddammit, Loki, you’re a disappointment!”

In the meantime, they’re all a bunch of punks and Loki’s a flipping punk as well, that cohesiveness of their status as a team is threatened almost as quickly as it began.

Anyway, all that is great and all, but I sure as hell shouldn’t have needed to sum that up in such (still-modest) detail. I give the plot a lot more credits than it’s due. Let me sum it up appropriately:

That’s it. Of course, we do happen to have Joss Whedon on-board as director and writer (with Zak Penn giving Whedon a hand in story) and the exact type of person who was looking eagerly forward to The Avengers undoubtedly had Whedon as his/her favorite person in the world at the time (And either Buffy the Vampire Slayer or Firefly as their favorite show ever. If it’s Firefly, that guys is cool by me. If it’s Buffy, ehhhhh, we gotta talk). And Whedon is of course as appropriately quippy as he needs to be with keeping his then-constant freshness and believable understanding of each character’s language and cadence (not like Avengers: Age of Ultron, with a script that sounds like leftover dialogue from The Avengers at times).

But it ain’t concerned with plot still. Not in the slightest. What we might consider plot for the film is unashamedly and blatantly just thoroughline for the film’s “THAT’S SO COOL” moments to connect together.

And you know what, there’s a hell of a lot of “THAT’S SO COOL” moments that, while I have not watched the movie completely again since I’ve seen it with my friends on opening weekend in 2012 (the closest I can think of when I half-watched it again was when some friends of mine – the kind who were avid Whedon/MCU fans – had it playing on Netflix, but I just about fell asleep on their couch) and still remember every single scene and most of the dialogue, frames, and cuts as though it was playing in front of me again. 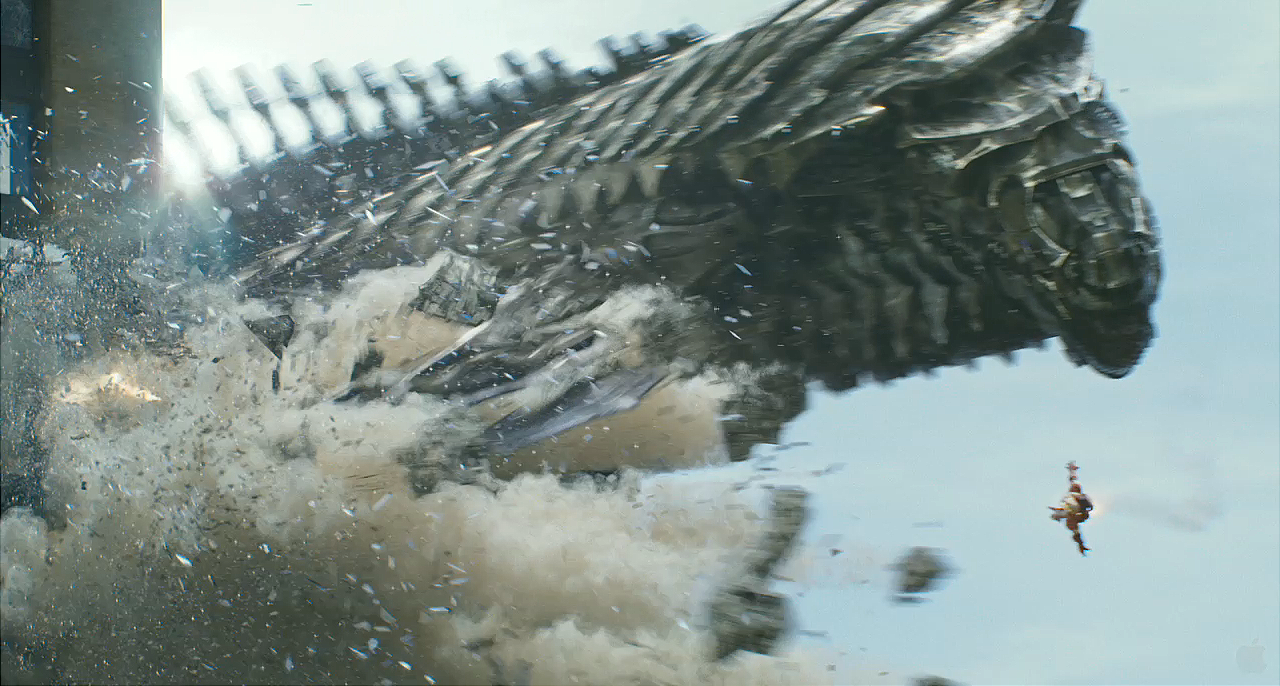 Whedon and cinematographer Seamus McGarvey do something I don’t think is rare nowadays for summer blockbuster tentpoles, but still uncommon enough to surprise me (certainly when I watched it) and shot the film in 1.85:1… and not once – even when the film is being at its most bombastic like the sprawling NYC showdown or the Helicarrier attack – does the film feel like its action spills over out of frame nor constrained. They astoundingly did a well enough job to keep all that action on-screen in such a natural manner. I don’t think much of Whedon as a director still (he’s more of a writer to me that happens to get a camera at times), but moments like the NYC Climax and even the moment when the Avengers argue together next to the Tesseract suggest that there is a director hiding inside of Whedon, even if he doesn’t let said director out entirely.

Added to that, I saw the picture in 3-D at a time when I wasn’t as much a 3-D aficionado as I am now (though I still know when to stay away when I can help it – I have not seen either Mad Max: Fury Road or Avengers: Age of Ultron in 3-D due to all the bad rep those 3-D conversions had got) and found it still delightful and charming. No immediate effect comes to me that made the action outright pop out, but in an industry with extremely shitty post-production transfers, it’s impressive enough.

It’s not perfect. Alan Silvestri had, by this point, gotten to his phoning-it-in phase of his film composing career and there are points in the special effects that feel separated from the action (though, not many points, since we’re talking Disney money for that CGI). The biggest problem is always going to be the same problem that the majority of the Marvel Cinematic Universe films have, which is that The Avengers is a product first and foremost and feels entirely like a product, even going out of its way with its final moments to establish that “Oh yeah, we’re making this movie another MCU commercial and a further stepping stone”, albeit the fact that Thanos wasn’t that well-known when The Avengers came out suggests that a lot of people at the time would have torn my throat out for having that claim against the movie.

Still, the point is that The Avengers doesn’t concern itself with much more than spectacle featuring characters we already know and that the movie takes no care of developing any further than they are at square one and it’s honestly fine and enjoyably by me. Not as enjoyable when they try to re-hash the same thing 3 years later, but for the two hours I sat in the theater watching it with fellow superhero fans and huge smiles on our face, damn worth it.