In all my glut and overzealousness with making a list about my favorite movie characters as our last Rank My Ranks had, I ended up with a lot of movie characters in the shortlist from the same movies that were… shall we say… complimentary to each other. And it was a pretty hard thing to let go of, but eventually I was able to make that cut by allowing myself one more list attached to the characters of my favorite horror movie based on the chemistry between certain characters… y’know, the kind Mike and I have so little of. Usually these characters have a negative charge against each other (a lot of these are more foes than friends), but they nevertheless play off each other in a manner that the movies they’re in wouldn’t be the same without.

I didn’t add to the last post because it already seemed like too much, but allow me to now behold as a bonus:

Because Dr. Pretorius is fabulous in and of himself but when he’s really trying to hit on Dr. Frankenstein and make him eschew his marriage vows to literally create a person with him… I mean, you can’t get much more overt in what Whale was saying than that. If the Monster is the heart of Bride of Frankenstein, this couple is its soul.

Two opposing sides in this struggle for an audience – One’s an uptight asshole cop who is there on a mission more intent on feeling holier-than-thou, the other a polite and charming pagan with a sinister undertone underneath him. Guess which one was actually the right side?

Two amazing actresses on the top of their game. The emotional abuse here is far scarier than any supernatural elements the film had to offer.

Sympathy for the devil in one easy stroke: Margaret’s a vicious vile monster towards her daughter, but once Carrie lets out all her rage, we find who the BIGGER monster is. Possibly the finest two-man con in all of cinema.

Speaking of movies I love because they are so 80s it hurts. This isn’t a great film by any stretch of the imagination, but I absolutely love it. Kiefer Sutherland is terrifying in this.

Vampires are meant to be sexy in this day and age. That’s kind of a given for most fans of the culture (I personally wish I were present for when we voted on this but whatever) and while there are sexier couples or cultures, none have the sort of homoerotic charge to them that Michael and David have as David tries to seduce him into joining vampirism. So strong the ACTUAL love interest for Michael (played by a stunning Jami Gertz) is just like “Oh hi, I like Michael too” in the background while Michael and David are just fucking around with the rest of the gang.

The original and arguably best dynamic between slasher and final girl, with all the right and usual tropes of being stalked and hunted, being the stalker/hunter, and being the man crazed enough to try to stop pure evil, all clicking together perfectly and never ever being surpassed. 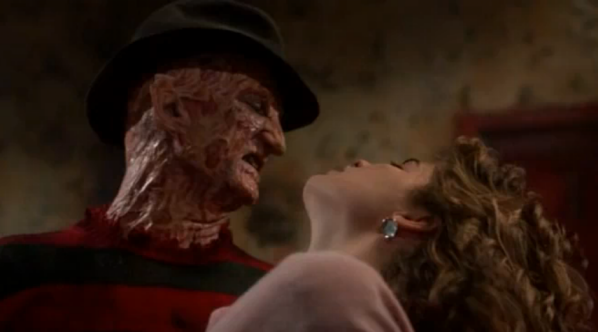 I don’t think it’s such a coincidence that the only good Nightmare films are the ones with Lagenkamp co-starring alongside Englund. Nancy is the one real person we meet head-to-head with in the entire slasher genre when it comes to how she approaches Freddy all her life, from sleep deprivation, half-baked ideas about how to stop him as a teenager, to going into the dreamworld herself to protect kids its her job to defend, to (if we go through New Nightmare’s meta narrative as Nancy story as I do) realizing something that logically shouldn’t be real is (also the stalking aspect). Freddy’s the bomb alone, I don’t need to say that – but he’s real power is in being a terror to Nancy Thompson and how their performances live on each other.

Nancy Thompson is a very strong female protoganist but I really do think that Heather Langenkamp is a fairly bad actress. It’s more forgivable in the original but it was the biggest issue I had with Dream Warriors (Part 3). On the other hand, Robert Englund is a fantastic actor and that series owes everything to him. I’ve always thought Wes Craven’s New Nightmare was a bit overrated. It’s an interesting concept, but I feel like it doesn’t live up to it’s potential. We never got a Robert Englund/Freddy Krueger showdown. How awesome would that have been? As for the other sequels, I actually really enjoyed Renny Harlin’s Dream Master (Part 4). It’s poorly acted, cheesy and over-the-top, but it’s one of the most distinctively 80s horror sequels. Part 2 is awful but hilarious because of it’s unintentional homoeroticism.

The only thing I want to go on record with is how I don’t think Part 2‘s homoeroticism is unintentional considering the scenes where Jesse’s asked if he’s sleeping with Lisa and how he goes to an S&M bar and all that ( turns out writer David Chaskin, Englund, and the openly gay Mark Patton – almost always making me slip into calling him Mike – who played Jesse all knew what they were doing… it’s director Jack Sholder that had no idea what movie he was making). In fact, I think the question of Jesse’s sexuality is easily the closest to a point of interest I had in the film and his sexual uncertainty was exactly what made him a perfect target for Freddy. But I’m digressing, so I rest the case.

5 and 6 are easily the worst of the series.

And that’s my little bonus list for y’all. I made it extra short so you don’t have to suffer at all. Feel free to comment your own favorite horror movie duos and such.