Do you know who doesn’t get the amount of love that he deserves? James Hong. He’s just completely unthanked for being maybe the most recognizable Chinese-American character actor since the 50s. Even when he appeared in the first two Kung Fu Panda films as Mr. Ping, the adoptive goose father of our goofy Dragon Warrior panda hero Po (Jack Black), his high voice gave a hefty amount of living personality to a character who is essentially just a backdrop to Po’s arc rather than an actual element of it, yet he was one of the more lively performances of the two. Bit roles like this really feel like we take his effortless familiarity for granted and I can’t think of a single movie that uses him to his potential save for John Carpenter’s Big Trouble in Little China.

At least until Kung Fu Panda 3 came along and, picking up right where Kung Fu Panda 2 left off with the sudden revelation that Po’s father Li Shan (Bryan Cranston) is still alive. The movie quickly brings Li to the proximity of Po and almost immediately do the two of them recognize each other as obvious father-and-son. And suddenly this drives a wedge into Ping’s attitude and causes him to start a conflict in his own head with Li for suddenly showing up on their doorstep to dilute the relationship Ping has with Po. It, truth be told, a subplot that undoes the sort of resolution they already had in Kung Fu Panda 2 when Po declared himself Ping’s son (in fact, a lot of KFP3 resteps in the plot beats of the previous two – thematically, it is once against concerned with Po’s self-identity, this time faced with the idea of how pandas act when he returns to the secret valley where the surviving members of his race live – but without really feeling like a rehash. It just feels like another obstacle to Po’s personal arc than the storytelling itself), but it gives Hong more of an emotional anchor to act through and it results in my favorite voice performance of the movie. It is earnest family drama where everybody means the best, but somebody’s gonna get hurt.

Anyway, that was meant to be a segueway to the review proper, but seems like between Po and Li’s reunion and Po’s sudden discovery of a whole culture of pandas he is expected to be a part of without much early footing in, I seem to have covered the plot summary well enough. The only thing truly missing is the threat of Kai (J.K. Simmons), a chi-stealing yak warrior who swears to vanquish the late Master Oogway’s (Randall Duk Kim) memory from the Kung Fu world. Master Shifu (Dustin Hoffman) and the Furious Five – Tigress (Angelina Jolie), Mantis (Seth Rogen), Crane (Davis Cross), Viper (Lucy Liu), and Monkey (Jackie Chan) – hold Kai off to the best of their ability. It’s obviously not going to be good enough so that screenwriters Jonathan Aibel & Glenn Burger can lead us to yet another kung fu showdown between Po where he uses what he learned – and this time around they really hamfist the pseudo-Chinese philosophies (Slavoj Žižek was right to fear the franchise… for the first time in his life he was right), but still overall satisfying character arcs for the movie to run itself through. Even if it kind of sticks around well beyond its welcome by the third act.

Still the point is that the Kung Fu Panda films overall have shown an impressive ability to continue a story from where they left off with only slight retread on the previous storylines. It’s hugely refreshing to get a film series that aware of its characters’ personal journey (it’s almost like the Before series, but I should probably shut my mouth before I dare continue to compare an animated kung fu animals film to a minimalist dialogue-driven character trilogy), even in spite of its flaws to make that journey pace out organically. I mean, again, that third act discussion between Oogway and Po (not a spoiler to note Oogway’s return, by the way… he is literally the first character we see) lasts longer than I’d like and works with that hokey faux-Buddhism, but it still means Aibel & Burger want to put Po in a comfortable position in case we get another movie to watch him grow, as doubtful as its existence may be (2016 has proven to be a financially disappointing year even for box office winners like this film).

That storytelling is aided by a cast that now knows how to play to its strengths. I’ve already pointed out Hong being my favorite of the bunch, taking care to make this movie now about his own side of Po’s struggles and Black himself has given Po a hell of a lot more confidence without losing his naive childishness that made the character so snug for the actor in the first place. He doesn’t share any fantastic back-and-forth with Jolie anymore like the last KFP film – in fact Tigress seems really downgraded this time around – but the rest of the Furious Five get their own moments to live like characters, even while the script is still juggling them. Oh the new cast, Simmons as Kai is the best of the bunch with his naturally burly voice letting him toe the line between weighty (but not threatening) villain and parody, I had more fun with Kate Hudson’s voice as a ribbon-dancing panda Mei Mei than I’d expect from any non-Almost Famous Kate Hudson performance, and Cranston is… he’s fine, I really don’t have words for his performance except that he did his job.

In any case, absolutely none of this – even Hong – is touching on the best part of Kung Fu Panda 3 and what made it such a joy to watch which is that it is fucking GORGEOUS. It’s easily the best looking picture Dreamworks Animation has ever put out: after teasing a versatility with the medium in assorted scenes of the first two films, suddenly DWA went all out in trying to find a good-looking median between Western animation styles – especially cel-shaded work (I feel like so many shots could pass for that 3D as 2D style that Disney’s 2.0 Renaissance launchpad Tangled wonderfully embodied in 2010) – and Chinese art and he result is a dazzling series of graphics that kept distracting me from the admittedly more lumpier scenes. It doesn’t have the artificiality of color-coded scenes like Kung Fu Panda 2 did in its crimson and gray, Kung Fu Panda 3 is more relaxed and golden and blue and green even when the last of those colors means the arrival of Kai and certain peril. It’s more aware of how light moves in air and eager to show off those rays and… god, I don’t have words, it’s just so pretty. I wish I had seen it in 3D is how badly I feel about watching this movie. It’s a movie that happily visually embodies the idea of serenity.

It has all the kinds of weaknesses of a child’s movie as you might expect – dopey humor, telling its story as a series of scenes rather than a smooth pace (again… that third act), and others – so it’s not nearly a perfect film, but it’s the strongest thing to have come from an animation company I’m not usually fond of and if they can keep their work at this level, I may finally begin to ease up on them. In any case, I can’t think of anybody passing on the chance to see this movie because “it’s a kid’s film” and that not turning into such a godawful mistake. Kung Fu Panda 3‘s too awesome, adorable, and unforgettable. 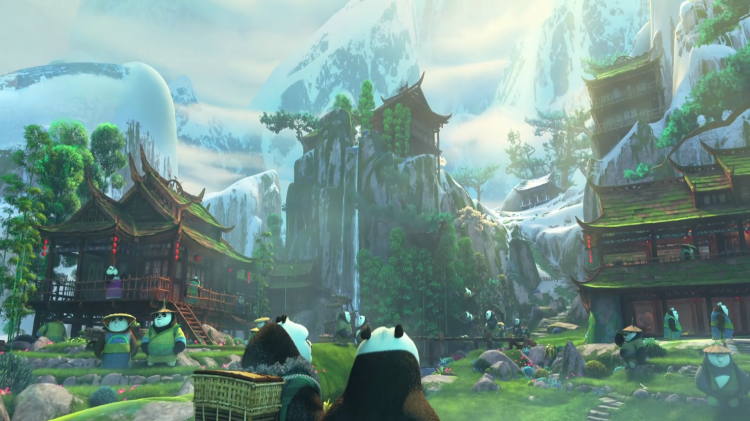