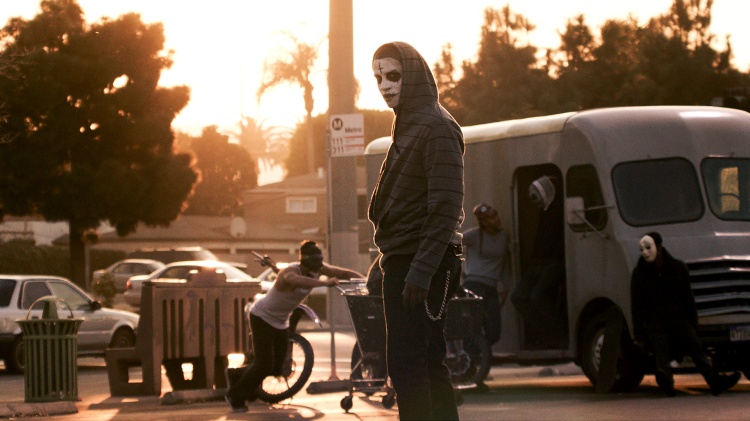 So, I just bothered to state one of my biggest problems with The Purge as a movie is how it uses a convoluted concept – In the Future, the New Founding Fathers implication of a day where the citizens of the United States can commit whatever crime they want for 12 hours with no legal consequence – to set-up an uninspired, boring, and restrained home invasion horror/thriller. With a sequel comes the promise of a bigger budget, and so returning writer/director James DeMonaco smartly allowed himself to expand with the concept by presenting a mosaic narrative that eventually coalesces before the halfway point into a group of people who band together to survive the streets of downtown Los Angeles during Purge Night. This obviously gives the film both license and expectation to deliver on a sprawling city in the middle of its own chaos and so fixes the problem of The Purge’s swearing to ambition without dedicating itself to such.

Another big problem The Purge: Anarchy tries to solve: how its concept makes next to no sense with its claim that such a 12-hour thing means both a near non-existent crime record AND 1% unemployment are its result with phenomenal aid to the economy. It doesn’t exactly do this with much knowledge on economics, politics, or other sociological education that would probably easily disprove the ability for the Purge to exist in the real world, but it attempts a logic and set of rules to this environment and that means the world to me.

Both of these things mean identifying that The Purge: Anarchy is an overwhelmingly better movie than The Purge for me. And yet it’s still not entirely satisfying, but hey, improvement IS a positive. 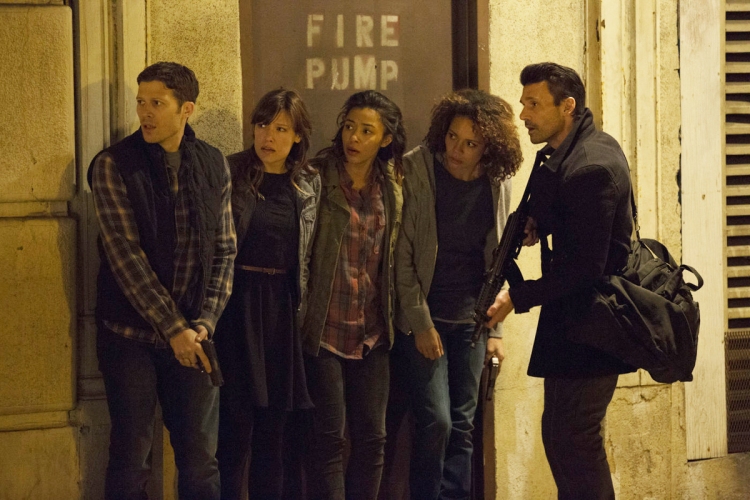 I did refer to Anarchy’s attempt to explain just why the Purge fixed the economy and crime so well and I may as well bring it up: Anarchy paints a much wider picture of classism than its predecessor by having the elite and wealthy (political leaders are immune to being purged) have particular stake in the ceremony, buying the poor and working-class or targeting them in the downtown and run-down areas of the cities to slaughter them en mass. Part of the manner they facilitate this is through auction for purgers and sending out government-sanctioned teams and gangs particularly intended on just grabbing and killing a bunch of folks from halfway houses. It takes a bunch of leaps with an absolute ignorance of micro- or macroeconomics to accept that, but on a conceptual child-brained level, one can see where “kill poor people” leads to “only rich people exist”. And like I said it is the thought that counts. The idea that crime goes down because you kill all your poor (and especially considering how many of the characters we witness as victims to the purgers are of minority races) leaves a very unsettling undertone of what DeMonaco might believe about them, but I gotta move on because I will be stuck on this concept forever.

In addition, it’s kind of still a really unambitious or unimaginative film we’re working on since in the vast potential of legalized crime for 12 hours we have only rape and murder attempted in the film. No drug use, no monetary crime, no open gambling, no littering, n—MOVING RIGHT THE FUCK ON.

Anyway, I may this film sound a lot more sprawling and vast in narrative landscape than it actually is and I should come clean: the closest we have to a protagonist, despite an ensemble cast, is an unnamed off-duty sergeant for the LAPD (Frank Grillo playing exactly the sort of discount Jon Bernthal role I expected him to play since I first noticed him in The Grey) as he roams the streets all loaded up to kill one particular man. The Sergeant is detoured from his mission when he decides to protect African-American waitress Eva Sanchez (Carmen Ejogo) and her daughter Cali (Zoe Soul) from one of those Purge paramilitary trucks and in the middle of it, finding a pair of stowaways Shane (Zach Gilford) and Liz (Kiele Sanchez), a married couple that got very unluckily stranded in the metro area and were being hunted by another Purge gang. This is very generous on the Sergeants’ part because it makes him the target of Big Daddy (Jack Conley)’s stalking, the leader of said paramilitary dressed like a member of the Texas Chainsaw Massacre family. This is also generous because despite the Sergeant’s multiple guns and lethal/strategic training being the only thing that protects these five lives, Cali takes up a good amount of the movie scolding the shit out of the Sergeant for killing people and never ever ever shuts the fuck up. Which illustrates just how muddled The Purge: Anarchy is about its ethics to begin with. 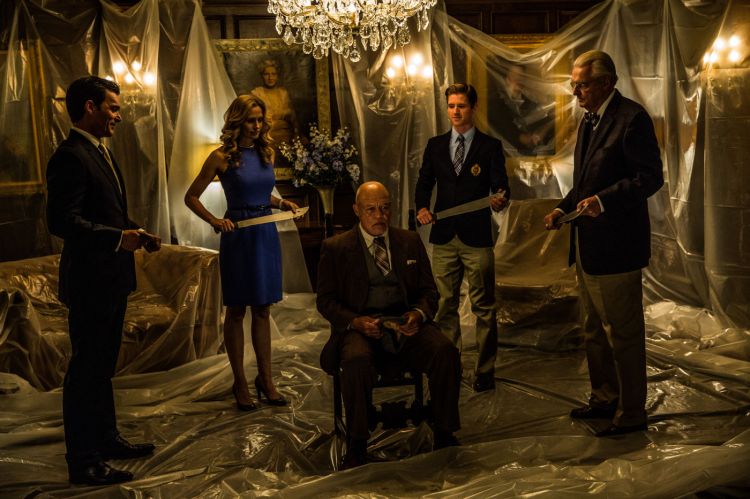 Grillo, being put in a role that feels tailor-made to typecast him for the rest of his life (granted, he also played a similar type months earlier in Captain America: The Winter Soldier), is one of the few sources of anything resembling personality (probably because he’s not as screechy as any of the characters surrounding him), with only Michael K. Williams chewing up as much scenery as he can in a very limited cameo where he plays an anti-Purge revolutionary Carmelo over several TV screens and John Beasley as Eva’s doomed father having his own remarkably shocking and moving arc taking place in a just-as-limited amount of screentime as Williams. Oh and otherwise, Edwin Hodges returns as the wounded intruder that started the plot of the first Purge film now siding alongside Carmelo’s group but I literally needed to be told the character was back and given a name of Bishop (he has a surname, but it switches off between this and the character’s subsequent appearance in The Purge: Election Year, so I won’t both).

Other than that, the people we spend this journey through the smoky, dark streets of L.A. are a bigger nightmare than all the carnage that surrounds them. That the moments where the movie tries to go much much harder on its satiric edge and political commentary than its predecessor (such as when we have to sit through the middle-class Purge party of Eva’s co-worker, despite Eva being shown as a waitress barely making ends meet and implying that he co-worker is on the same level) have more energy than the actual action-thriller element of The Purge: Anarchy still implies that DeMonaco is so much more invested in making his commentary function more than the movie overall. All the moments in between of The Sergeant and company struggling to make through the night are more sleep-inducing than thrilling, going through a monotonous promise that Big Daddy and the rest of the bad guys are right behind them but here is where we can just walk and talk and HERE IS WHERE WE HAVE TO RUN. Maybe it’s the hypnotic rhythm that gives those moments their predictability even for people who haven’t seen a single movie in their life that also gives them that sleepy quality.

That is, save for the climactic maze battle where it shows such a dissonant inability to frame or cut gunfight action worth a damn – a possibly seizure inducing morse code of white flashes and light where it takes a while for me to realize who is shot and whether or heroes survive – that it maybe explains why DeMonaco has to spend so much effort on his moralistic themes than anything else or why The Purge tried really hard to keep itself in one location. He can’t really provide a well-crafted movie or script if he tried. But at least that moment is one of the few moments where The Purge: Anarchy wakes up as a film and if it just happens to also be the action scene where it does, well… I guess we can be generous. This movie (and franchise) needs it. 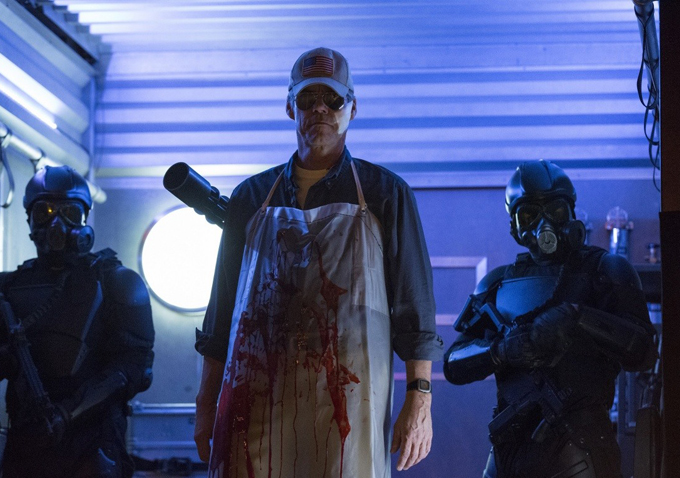