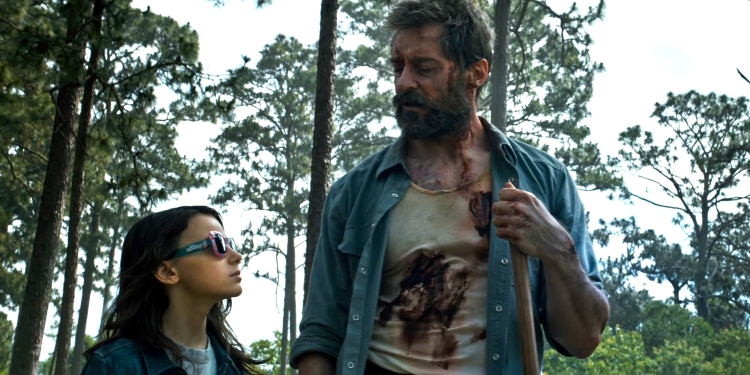 I don’t know why I held that torch out for so long but ever since the marketing for director/co-writer James Mangold, producers Simon Kinberg and Laura Shuler Donner, and star Hugh Jackman’s farewell to the beloved X-Men character Wolverine titled Logan after his common (but not birth) name, I really really thought we’d be going for a father-and-daughter road trip type of movie like Alice in the Cities (really most Wim Wenders pictures) or Paper Moon. And indeed Logan is on the run alongside a young ward by the name of Laura who shares his abilities (Dafne Keen) and a now older and more jaded psychic Charles Xavier (Patrick Stewart, who also announced this would be his final turn in the role) broken by Alzheimer’s and it does have a sort of focused on the tired American landscape that makes a lot of sense for the film to receive all the comparisons to a Western that it has been getting (and kind of fishing for given how often Shane pops up as a plot point). But that means nothing! Nothing at all when Keen – wonderful as she is in the role – is not anywhere near verbose as Tatum O’Neal.

Unfairly stupid expectations aside, Logan is absolutely the best of the Wolverine solo series that begin back with 2009’s X-Men Origins: Wolverine. Mangold, Scott Frank, and Michael Green accomplish that by pulling the same “Steal Mark Millar’s general idea but leave his shitty plotting and writing behind” strategy that made Captain America: Civil War a decent movie and the sparseness and restraint of that attitude makes it the most grounded film since X-Men Origins: Wolverine. The crux of the story is that in 2029, the X-Men are no more and mutants are nearly extinct. Logan takes care of the mentally deteriorating Xavier with the help of mutant sensor Caliban (Stephen Merchant) when Laura falls into their laps with Xavier’s invitation and a squad of mercenaries named the Reavers headed by Donald Pierce (Boyd Holbrook) come bringing hell back into their lives in their hunt for Laura. Logan begrudgingly agrees to take Laura halfway across the country and while there is a bit more mythological fleshing-out (especially round the third act) than I am letting on, I don’t think that matters.

This is essentially a better version of X-Men Origins: Wolverine to me, sharing all of its strengths like an interest in trying to make the film a solo story (without the weakness of being afraid to give Logan the main anchor of the story) or the absolute restraint and low-key design of the whole film (without the weakness of looking boring or indistinct). And what really sells it to me on its R-rating (even despite more f-bombs than I think necessary and a moment of nudity that’s totally gratuitous for the sake of “hey, this is an R”) is how it’s also willing to function as a modernized version of that aforementioned Shane as Logan attempts to express to Laura the regret and weight that his violent disposition has brought to his soul. This is something Jackman and Stewart are able to jump unconsciously given how long they’ve spent inside the skin of these famous characters and, from the reactions I’ve heard before even catching the film, fans are only more willing to give gravitas to the finality of this movie’s existence to tie up the Wolverine story. And as contrived and cliche and predictable as the revelation of Logan and Laura’s connection is, the two work together so well in energy and tandem that it just seems right to find out the things we find out. Keen could easily steal the show and yet somehow opts to stay in the back of Jackman’s own development of the character. And the violence is intense and harsh enough to push Logan’s world-weariness to the edge. Hell, the movie is even stopping during its long road movie structure to have a subplot function as Wolverine’s personal Shane moment helping a family of modern homesteaders against the angry armed land barons (albeit the end of that particular subplot is extremely mean-spirited even by the standards of Logan as a film).

I guess, what I’m trying to say is when Logan, Xavier, and Laura are on the road (and it does feel more like “on the road” – thanks to Stewart’s persuasive performance being on the leisure side of the trip – than “being chased” like they truly are) is when the movie is at its best and I could have done with another hour of that. Unfortunately, that doesn’t last as its third act and climax turns more towards the superhero movie tropes it spent 2 hours desperately avoiding by giving YET ANOTHER PERSON involved in Wolverine’s experiments and having a very poorly edited battle. It is the very worst sign when I have all my eyes on the screen and yet completely miss the moment the main antagonist was killed. And yet the movie is wise enough to utilize its last few shots to end the saga on its best note and to lay it to rest in a manner that your mind is precisely on that final beat and the mood it sets in you as you walk out the theater.