“Scratch any cynic and you will find a disappointed idealist.” -George Carlin 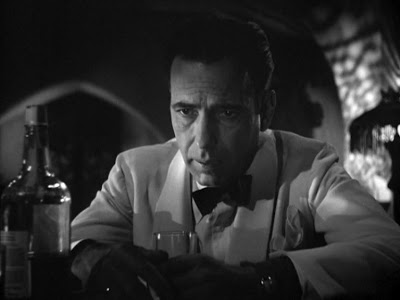 Casablanca is to me the quintessential example of Hollywood alchemy and it comes right at the very point where the studio system was beginning to drop off from its golden years in the 1930s, explaining how the production was so hands-off from the Warner Bros. superiors to director Michael Curtiz and producer Hal B. Wallis’ involvement. And yet such a tossed-off afterthought to the movie is now one of the most firmly entrenched entries in film history. Which makes it feel somewhat like a last hurrah to a kind of movie-cranking style that you simply don’t see anymore these days, much as cinema today still seems indebted to nostalgia towards those eras – what easier way to spur that nostalgia than Dooley Wilson’s sweet voice serenading “As Time Goes By” – and try to imitate it in homage form. You can’t recreate Casablanca by any means, no matter how much you try to ape from it. It is a product exclusively of its time and of its situation, only the right combinations at the right moment could have coalesced into this perfect form of cinema, the way Casablanca gets to be formed.

So, for God’s sake, stop aping from it, Foodfight!

Anyway, I’ve been going through quite a phase in my life over the past few years where two movies altogether struggle within me for my top spot of My Favorite Movie of All Time and I think they both have to do with how powerfully each one speaks to me, so it’s time for another extremely subjective review where I just square with what Casablanca says to me about myself.

And that means getting into the root of what is, to my mind, one of the most perfect narrative works of screenwriting that all started when Hal B. Wallis of Warner Bros. purchased the rights to husband-and-wife team Murray Burnett and Joan Alison’s then-unproduced play Everybody Comes to Rick’s. In the end, the real MVPs of the story – notoriously writing it and re-writing it over and over until the bitter end – are Philip G. and Julius J. Epstein (other notable writers were Howard Koch providing more political elements while the Epsteins worked on another piece of agitprop Why We Fight and Casey Robinson touching up on several meeting scenes). The cobbled together aspect of the story, throwing in further and further dramatic reveals and shading characters with more dimensions on each page, can be seen in the urgency of every development in the script. But, it’s still incredible how flawless the story cogs work within it and how quotable it remains on top of it. 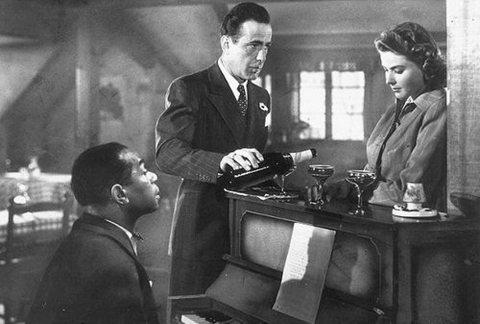 But I still didn’t elaborate on what those story cogs are: The Nazis have arrived and occupied Morocco and Major Strasser (Conrad Veidt) has been stationed there in order to see to the immediate re-capture of concentration camp escapee and resistance leader Victor Laszlo (Paul Henreid), who would have to go to Casablanca en route to salvation in America. At the center of this is the apathetic Rick Blaine’s (Humphrey Bogart) Cafe Americaine, a hot spot where incidents are always happening and the latest one of which is the sudden arrest of the ill-fated criminal Ugarte (Peter Lorre) over the death of two German couriers with MacGuffin-esque can’t-fail letters of transit out of Casablanca. Only problem is Lorre left those letters in Blaine’s hands and while Laszlo would very much like those letters, Blaine has complex history with the woman Laszlo is fleeing with, Ilsa Lund (Ingrid Bergman).

There’s a real balance in this film with the desires of the screenwriters and director Curtiz, as it’s clear that the screenwriters want to focus on the melodrama of the scenario – every single motivation is covered and staked and communicated clearly with no room for ambiguity except in the very perfect ending – but Curtiz wants to up the romantic element which is probably why if the scene can spare as much framing as it can on Rick and Ilsa, with poor Laszlo nearly out of the picture, it can. The movie sells the chemistry between Rick and Ilsa as dynamic and interesting (while Laszlo and Ilsa are still sweet together, thanks to their performances) and that’s what makes it easy to be convinced Rick may be off to the deep end with what he does with the letters of transit. I mean, I don’t think anybody doesn’t know what happens in Casablanca at this point. But in the moment, Rick’s actions and statements are so very grey and cynical that I’m not convinced he knew 100% what his decisions were going to be until the end and Bogie himself does oh so much to sell that indecisiveness (the only thing he does better than tease the possibility of being a villain in his career despite earning our trust is play drunk and hardboiled and sharp-edged and… ok, he does everything great) while Bergman embodies a need to square her romantic history and bravery in trying to spare her husband of any pain in the truth. Frankly, I don’t think Casablanca is generous on paper to Ilsa as anything more than a gendered second MacGuffin between two men, but Bergman stands tall and proud in that thankless role that it’s not a surprise to find why she was a star afterwards.

This doesn’t mean Casablanca doesn’t take seriously its political elements. They’re a continued presence that OF COURSE pay off in the final product and the movie’s second most memorable scene is not a political Laszlo scene for no reason. “La Marseillaise” drowning out the vain singing of the Nazis overtly uplifts and tugs at the heartstrings and I don’t give a damn. Those are real immigrants fleeing from German occupation right there in the scene singing along in defiance at the moment the world needed it most. Julius Epstein claimed the movie was full of corn, but that’s dismissive of the sincerity and genuine emotion on the film and the most invested usage of extras I can imagine in any film. If THAT’s corn, then I don’t know what’s real in movies.

But maybe it doesn’t have to be too real. Casablanca fills me with a romantic feeling, every element of it perhaps due to the artificiality of it. I’m not gonna be fooled by the production design of this B-movie-in-all-but-name when I’m actually from the Sahara and have been to Morocco myself, but it gives the film such an exotic atmosphere (something we’re pulled out of during the sophisticated Parisian flashbacks in the end of the first act) that heightens it as manufactured but convincing romanticism. As much romanticism as isn’t already provided by the fact that World War II is to our minds the last war to actually have clearly defined heroes and villains and thus making us yearn for more moral conflicts than the ones in our day and age, so having a movie not just made in that time period but actively pushing towards an attitude for the war that desires we get right to Europe and fight the Nazis head-on. It’s essentially the mythologizing of history right before our very eyes and I can’t imagine getting to have that sort of retrospective attitude toward this movie that fuels its battle for my Favorite Movie of All Time without being born 50 years after its existence. And yet there’s no distance in its mythologizing because of the immediacy of World War II. That very direct inspiration somehow is able to transcend time and its dated context to the very writer of this post every time I watch it. It’s a weird paradox of time of reception that is hard to explain, but it’s there.

Anyway, I’m a cynic, an exhausting cynic that curses and makes sardonic cracks and teases indifference and selfishness same as Rick on the screen. I make sarcastic quips when I don’t need to, I keep to myself deliberately and sometimes inadvertently, I get angry easy, these are all things people attribute to me. And it’s honestly not something I want to be, much as I doubt anybody wants to be a cynical angry person. Casablanca is certainly THE movie that helps to convince me I’m a romantic, just as much as the charmingly corrupt Capt. Renault (Claude Raines threatening to steal the whole damn movie from an already stacked cast) implies in his gamble with Rick Blaine. Blaine’s ability to make a decision by the end of the film for the fate of Laszlo and take a side for the war after the film shakes him angrily and demands it… that’s illuminating. It means there is something he’ll fight for, something to believe in within the war, and seeing myself in Rick means that maybe I want to be a romantic too which brings out my attempt to be the best version of me I can be whenever I can be aware of my actions. Which fuels a much better feeling in myself and yeah, a form of confidence. It’s not for nothing that this inadvertently became the movie I keep showing any girls I date.

It’s so that when we inevitably break up I can look them in the eyes and send them off with a “We’ll always have Paris” and “Here’s looking at you, kid”.

Holy shit, that is cynical. Maybe I should watch Casablanca a few more times. 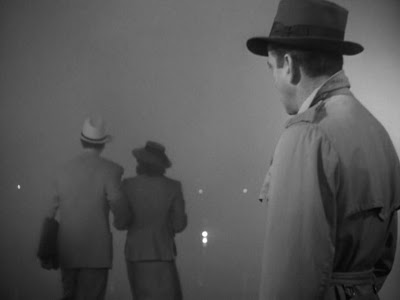 Thanks for reading. Oh what’s this? A Patreon page? If you enjoyed my writing and would like to support it, share this post and tell your friends bout Movie Motorbreath on facebook. If that ain’t enough and you really want to give us financial support, go on that Patreon link and get you a bad stick figure of your favorite movie!