I don’t think I’ve ever seen a slasher film as pleasant as Happy Death Day and I doubt I ever will. The only true contender for that spot is Behind the Mask: The Rise of Leslie Vernon and there’s definitely a bit more viciousness in its third act than there is in the entirety of Christopher B. Landon’s third feature film. For most people that might be quite the dealbreaker, especially in the expectation that a horror film has to… y’know horrify kind of. But I’ve never been one to consider slasher films a subgenre to hold to for its scariness and the fact that Happy Death Day takes full pleasure in stretching out the novelty of its premise in a manner that’s kind of genial doesn’t make me regret the number of times I laughed and enjoyed myself during the whole thing.

That very premise being how nursing student Theresa “Tree” Gelbman (Jessica Rothe) has been living her life in flippant antagonism towards everyone and everything around her and her hedonistic life has found her at the end of a butcher’s knife the night of her birthday. Only she wakes up again on her birthday morning in the same boy’s dorm of Carter’s (Israel Broussard) and a bit more wary of what she might assume was a dream that felt too real, tries to deviate her path slightly only to once again find herself stabbed to death by the same BabyFace Masked. And with that death, she wakes once again understandably freak out by the time loop she’s stuck in – enduring her birthday over and over with the same violent end, trying to find a way to circumvent the loop and stop her murderer.

Or the elevator pitch version “Groundhog Day as a slasher”. There’s even a button of a scene where they name-drop Groundhog Day as a “yeah, we totally ripped off that movie” statement without adding the weird attitude of “… And because we said it, you can’t call us out for that” that most self-aware horror seems to want to adopt as bet-hedging. Happy Death Day‘s script by comic book writer Scott Lobdell is less concerned with pointing out the absurdity of its premise and more concerned with finding a way to make it fun without being the butt of a joke. And it certainly has a sense of humor about itself, but one that gets to exist side-by-side with Tree’s frustrations at waking up, being killed, and repeated and how that affects her day-to-day mood. It’s that dissimilar from the idea that we’re all different people every time we wake up, though I’m doubtful that was on Lobdell or Landon’s mind and that they merely wanted some semblance of a character development arc as Tree recognizes just how arbitrarily she was treating her sorority sisters, her father, Carter, and the professor she’s having an affair with and see how much of her problems she can shelve in the hopes that she survives to the next night.

It’s a lot shallower than that on paper but Jessica Rothe is pretty much a miracle of a performer, an exhausted and sarcastic pillar of charisma that gives this movie all she can to have some semblance of momentum based on the way she evolves and learns about herself. And despite indulging at points in the sort of shallow catty bitchiness that outs movies like this as obviously written by a guy who saw Mean Girls once and didn’t get it, it also has the same sort of forgivability as Mean Girls. We don’t really hate Tree on the first loop and by the middle of the film, we feel her annoyance at every single slip-up that lands her in bloodless mortem (the editing takes advantage of the PG-13 nature of the film to make smash cuts play as punchlines a la Edge of Tomorrow and Groundhog Day, especially in a Demi Lovato-tuned montage and a ringtone allegedly created for the movie that actually sounds creepier than anything in Bear McCreary’s cliched score), and by the time she’s kind of figured it out, her joie du vivre is pleasantly earned in the face of how Rothe takes every new step differently (Broussard kind of follows up with different responses to the same event, but even at second-best in show – partly because he just shows up the longest – he’s just not on Rothe’s level). Maybe it’s partly in the aftermath of having just finished binging The Good Place, which accomplishes similar things but honestly better, but Happy Death Day‘s intention to see a miserable unhealthy person grow into something better makes me more willing to see it all the way through, even in spite of Lobdell’s ethic lapses. It certainly has some obvious Eszterhas-level attitudes about women (especially in its third act which feels like the weakest element of the script), Macklemore-level naivete about sexuality, and the in-sorority bullying of the one non-murderer character we’re meant to hate is clearly racially coded. But none of those things pop their heads long enough for me to not have fun. 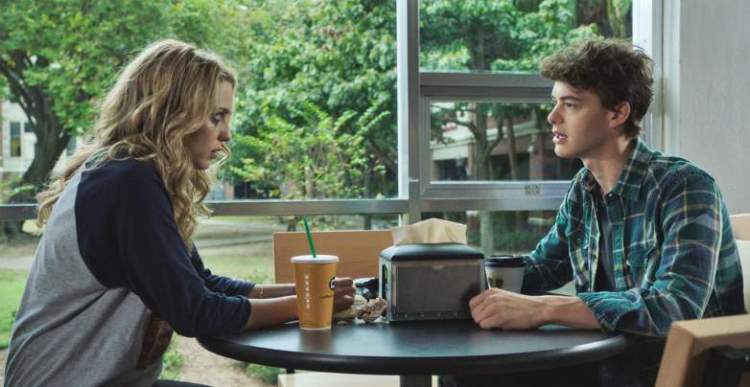 And this is all sounding like I’m not really interested in it as a horror film and I don’t want to pretend I think it’s a bad horror film. It’s not reinventing the wheel, but its treatment of the blue cold hospital, the tall cavernous clock tower, and a creepily cartoon killer mask based on the college setting’s mascot (by the way, who would possibly find a football team called the Babys intimidating?) is at the very least on the better side of Blumhouse cliches as possible and Happy Death Day certainly wants you to know that even if Tree’s never truly in danger, she still feels threatened and trapped in slowly canting angles and surprise light blowouts. But it also isn’t very much concerned with elevating itself as horror. Honestly, if it weren’t for the comedic tone which isn’t even all that unique, Happy Death Day would feel entirely like just another forgettable horror film that happens to work enough that you don’t demand a refund.

Still and all, Happy Death Day can’t help sharing its enjoyment of digging into a hat of tropes and using its horror identity as a source of things beyond the genre. Like It, the bigger horror film of the year, I’m not singing its praises high and far but I am more than willing to relive it like Tree did (given that I literally walked out of a second screening before I could finish this review) and it’s not freaking me out that I did.