So, it’s no secret that Night of the Living Dead is one of the movies that so viscerally changed my life as a film and that it is reserved that most esteemed seat in my heart as my favorite horror film of all time. I feel like the things Night of the Living Dead did for the genre were never bettered in the slightest since. And yet, common consensus seems to lean on its 1978 follow-up Dawn of the Dead being one of those rare cases of a sequel outperforming its predecessor and if I can’t really bring myself to love it more than Night, I still might just lean on the idea that Dawn is kind of the “better” movie in a sense.

Part of it is having to just come to the conclusion that, despite being some scraggly ol’ hipster who loved the genuine lo-fi work of Night of the Living Dead and the way Romero squeezed atmosphere out of every single limitation he had and from sheer creativity, Dawn of the Dead is objectively more polished and thus a lot more focused as a horror film and as a social commentary. For of course, like its predecessor, Dawn of the Dead in itself is a very dedicated commentary ingrained inside the presentation of a zombie movie and unlike Night, it does take a good amount of digging into it to find audiences looking into a mirror about how the then-alarming growth of suburban shopping malls as a hub for community interaction deteriorates human interaction and turns folks into mindless followers of blind consumerism and BTWTHEREISNOETHICALCONSUMPTIONUNDERCAPITALISM… *clears throat*.

But there’s just so much more ambition in Dawn of the Dead that Romero gets to act upon from square one that distinguishes the movie from the very first shot with a wash of bold and textured red – distinguishing itself from Night‘s black and white – that widens and focuses to reveal it was simply a close-up of the carpeted wall of a local Philadelphia news station already three weeks deep in the outbreak and shutting off its broadcast soon. It’s here where producer Francine (Gaylen Ross) and traffic pilot Stephen (David Emge) decide to steal one of the helicopters for their own personal escape, which… guys, a helicopter! Romero gets to use a helicopter and gives his characters more mobility (and thus the zombie infection more scope) than in the claustrophobic trap of Night‘s isolated house (though again… I prefer Night in that sense, I just find Dawn‘s approach impressive!).

During their escape, they also pick up SWAT team member Roger (Scott Reiniger) in the middle of his brutal and consciously racist police raid of a housing project. During this raid, we get to witness the full extent of the zombification of the dead and the escalating violence in no time introduces us to Tom Savini’s landmark zombie makeup and gore – comic book greys to neutralize any details in a person’s face without losing their aged look (this becomes clearer as characters we see die and return as zombies), vibrant red blood so we know somebody is maimed and the gore is the first thing our eyes target, and an all-timer of a head explosion. The sort of violence you get in a 70s cop picture put now to a darker context that demands you reckon with the amorality of the SWAT’s fascist exercise of power on the poor and cold disposal of their bodies in a practical sense. In a moral breakdown atop the building, Roger meets the hardened but humane Peter (Ken Foree) and invites him in the escape group, thereby rounding their aimless flight out of the city.

After finding out staying in the air is easier said than done, they make their personal base out of the Monroeville Mall, a huge construct of shops and restaurants and other resources that they take much time turning into their own fortress of personal goods. And at first, it’s relatively fun as a bonding exercise to have them figure out plans and ways to maintain the whole location for a long time, but soon after it becomes frighteningly insulated and the activities they try to indulge in – now that they have everything they want locked away from the world – like Stephen and Fran’s makeshift restaurant date (with a shockingly dark punchline cut to it), just feel like attempts to pretend the world isn’t dying outside those walls, even despite Peter’s steely residence near screens to illuminating the insanity going on with psychotic talking heads and Fran’s insistence that the mall won’t last. It’s a weighty portrayal of the apathy privileged people have to others’ suffering when it’s distanced and the way that Romero shoots the even the maintenance hallways and vents with plenty of space between the cameras and characters sells Monroeville Mall as just as openly empty as the lives of our four.

That’s without recognizing how effectively uneventful Dawn of the Dead becomes very quickly. From the moment the news duo pick up the SWAT duo, the movie doesn’t really have a narrative object or target outcome. The characters have few places to express anything beyond sheer survivalism (though they’re all embodied by great performances) and until maybe the 2/3 moment – punctuated by a stressing waiting game turned into a headshot – their detours are almost strictly utilitarian. And so they earn the R&R they take in Monroeville, but it still feels sheltered and naive to do so in their condition and their personalities are clearly clashing enough to promise their eventual exile from the shelter they found. It’s almost the Tokyo Story of horror films in how much time you understand is wasted watching these folks try to deflect the inevitable.

I realize I’m not delivering this as humorous, but that’s one other thing about Dawn of the Dead. Its sense of levity and personality – most largely supplied by Italian prog rock band Goblin**’s iconic score overselling the eerie nature of a giant empty mall (the most iconic musical cue of Dawn, “The Gonk”, is in fact not Goblin’s creation) and a climax that precludes its intense horror and hopelessness with a disarming amount of pie fights – is what prevents Dawn from turning into an overwhelmingly nihilistic film in spite of all its observations about humanity, especially in consideration of the alternate ending it was forced to shelve due to budgetary restrictions*. And this is probably where I especially end up preferring Night as a film, because it’s fearless in selling its themes angrily and with vicious bite. Dawn still finds itself watchable and insightful due to its craft and survives the theatrical ending turning out to be the film’s only flaw.

There’s only so much you can stretch out of the budget and narrative constraints of a single-location story that demands its characters, save for Fran, refuse to evolve due to their egos, but Night already made good on Romero’s promise to deliver on that and Dawn of the Dead is the result of him trying to push it further and build as a filmmaker. When one recognizes that the driving force of the zombie genre has to be its characters cooped up, Dawn of the Dead is the ultimate zombie film to bring that out. And being made in the ultimate middle ground between the updated budget of an esteemed filmmaker but the creative freedom of an independent feature, Romero ends up with the ultimate movie to show his heart, his ideas, his glee, and even the city he came from that he clearly loved for supporting his dreams and letting him shooting in malls and airfields and news stations. There’s probably no better film to remember and revisit him by.

*Allegedly, the particular dummy needed for the grim final note of that alternate ending was considered unfinished and couldn’t be used so they just had it the target of that famous head explosion in the housing raid.

**Goblin was of course at the time collaborated with Italian giallo icon Dario Argento, who also famously helped Romero with the development of the film. 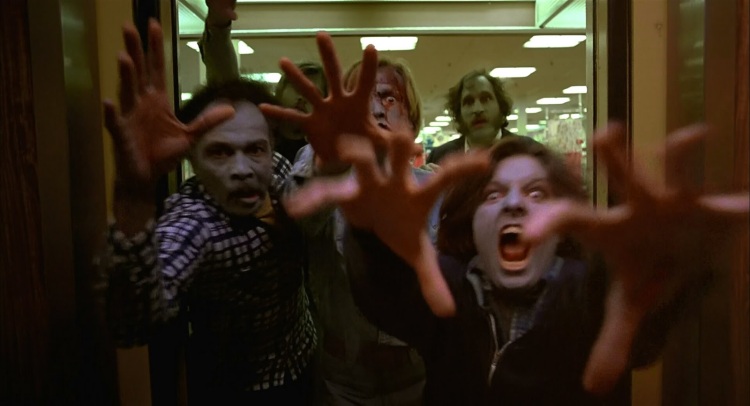