I don’t think I can blamed for feeling that sometimes feminine-focused storytelling is better understood by women. While of course Don Siegel and Clint Eastwood did fantastic work with their adaptation of Thomas P. Cullinan’s A Painted Devil back in 1971 under the title of The Beguiled, but Sofia Coppola’s remake of their film is a lot more relaxed and confident about the complexities of its characters in a way that Siegel and Eastwood couldn’t be. Indeed where Siegel had to grab every incident in the plot and squeeze out the most melodrama he could possibly stomp out of a story that feels alien compared to the rest of his work (save for possibly another Eastwood collaboration – Two Mules for Sister Sara, though I have not seen that one), Coppola’s treatment of this material is more chilly and sleepy. And that’s appropriate since she’s a lot more familiar about the malaise shuttered women feel in a singular location for an indefinite amount of time, surrounded by the harsh masculine violence (portrayed by a brilliant sound mix just distantly implying the battles occurring).

In Coppola’s The Beguiled, she explores that malaise through the tale of Martha Fansworth’s (Nicole Kidman) girls school in the middle of Civil War-torn Virginia as one day her young student Amy (Oona Laurence) brings the wounded Union Corporal John McBurney (Colin Farrell). Bringing a smoldering and helpless man into these four walls obviously sends a shockwave through Farnsworth, her teacher Edwina Morrow (Kirsten Dunst), and the five students, including and especially Alicia (Elle Fanning).

Young women locked in four walls and that empty time and space informing them. This is exactly the type of material she’s been working with for much of her career – her first three features The Virgin Suicides, Lost in Translation, and Marie Antoinette especially. And while probably more plot-driven than either of those three films, Coppola ends up finding a way to let The Beguiled simmer into just watching all these characters who don’t know how to respond to each other bounce off the walls emotionally. Gorgeous walls they are too, designed by Anne Ross in light pinks to feel like a pale ghost of a house trying to dress itself up for company but giving way to beiges failing to hide the school’s emptiness. And captured in lyrically soft lights by Phillipe Le Sourd that let those colors blanket the scenes in bored yet distinct ways. It’s a lovely film to look at and thereby a lovely one to live in despite the characters we’re living with, all vulnerable in some way, all trying to hold control over the situation so they’re not obliged to one another. So that I find Coppola’s Beguiled better, by a sly margin, than Siegel’s Beguiled should not be a surprise to anyone who knows me except for maybe those whose opinions usually align with mine and diverge at this point by disliking the movie. 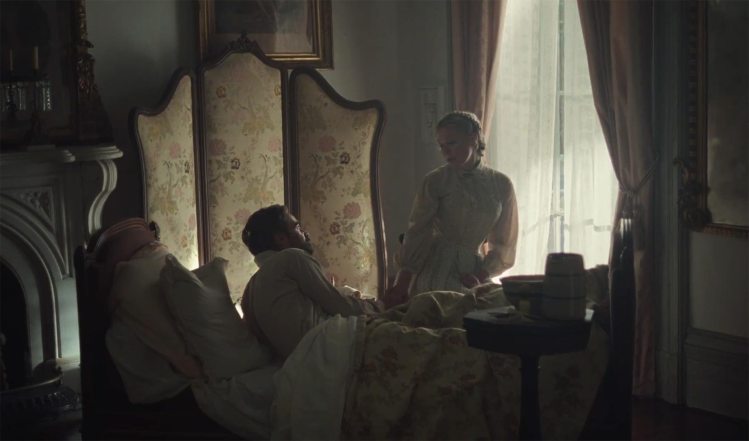 Can’t bring myself to blame them. If there’s one place Coppola fails in Siegel’s stead, it’s that her Beguiled is so lax that it doesn’t bother to scrounge up any momentum as a thriller*. While that might add to a violent jar when the third act escalates, at no point in the movie – even at that first act – does it feel like it’s anymore than a really spiteful character drama without the slightest hint of danger. That’s probably not aided by fact that in an ensemble almost entirely personified by different levels of repressed female sexuality (this feels a lot sexually heightened than Siegel’s film, but it’s still there – especially in Farrell’s chemistry with Dunst) and varied in responses to that repression, the odd man out is Farrell. Maybe this is just as a unfortunate result of having seen the original first, but Farrell – extremely attractive as he is – does not have an ounce of the sexual charisma that Eastwood had as McBurney. Nor does his about-face around the second half of the film feel much dangerous as it is presented like a kneejerk response to misfortune. And that’s troubling, given Farrell has shown all throughout his career that he’s capable of both sex appeal and heightened antagony (I particularly think, funny enough, of another remake performance – Fright Night – combining both). In any other movie, Farrell’s muted performance would have been adequate. In the context of this heightened conflict of sexual wiles and manipulation, it’s an outright liability.

As for liabilities in the ensemble, the biggest one is not who is on-screen, but who isn’t. The black slave character of Hallie, previously a grounded presence that suspected McBurney early on, ends up removed on Coppola’s part (explained as her feeling unqualified to talk about slavery). Ignoring the evident collapse of the third act’s tension by taking away a character apprehensive to McBurney’s presence and thereby straining the already pretty languid pacing, I don’t really find much argument against the fact that deciding to make a Civil War film while consciously removing a pre-established black character is erasure (although Ira Madison III – among others – argues otherwise). In either case, the drama has to be entirely rearranged by Hallie’s presence and so Coppola as writer and director has more heavy-lifting to do.

I think she pulls it off and earns her Best Director Award from the film’s 2017 Cannes premiere, providing a film that balances the atmosphere in an uncanny way between the funereal and the flowery and brings a shudder to me while she also composes a forceful clash of charms from at least three different powerful personas on-screen (Seductive Fanning, Matriarchal Kidman, Erotic Farrell; on top of the brilliantly withdrawn Dunst and the impressive informal arc from innocence to complicit darkness in Laurence provides. I only regret that an actress as talented as Angourie Rice doesn’t get much to do). It’s not as overt as its predecessor, even in the carnality of certain relationships. I find that a boon, letting The Beguiled wrap around me into an ennui relatable to the characters on screen and nestling itself nicely into the output of a director I’m always ready to revisit.

*The guy I watched Coppola’s film with was actually surprised after-the-fact to find out that it was supposed to be considered a thriller. He hadn’t seen any advertising of course, which angled Coppola’s film as a horror film (I probably wouldn’t have convinced him to see The Beguiled with me if he saw those trailers). 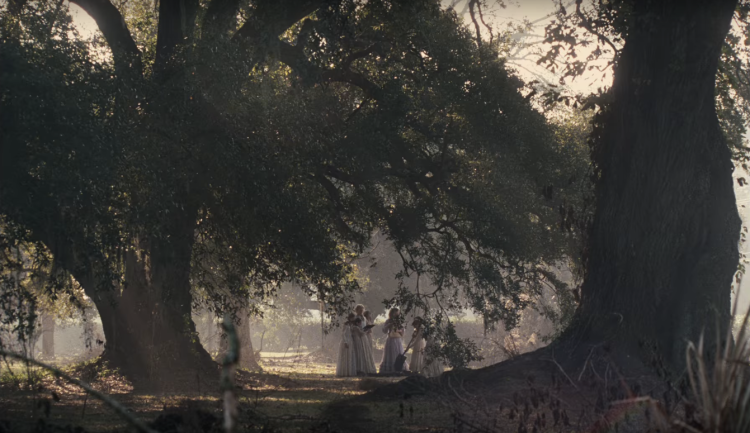