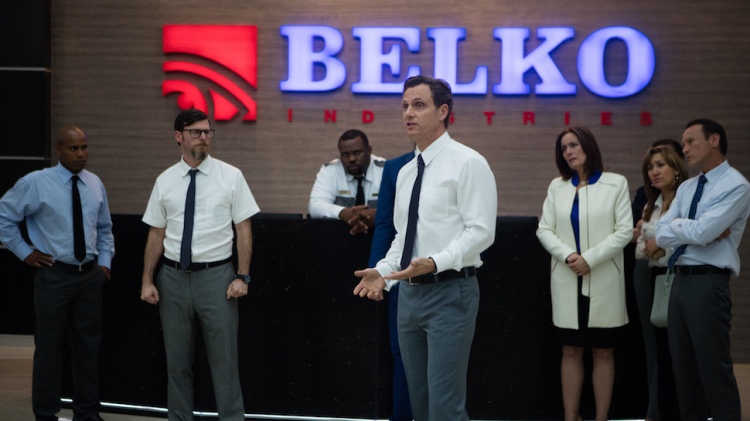 The Belko Experiment is the sort of premise that, unless it has an immaculately talented director behind the wheel who could balance it all, could almost only go in one of two directions – it could either be a broad comedy doubling as light satire or it could be a cold harsh and cruel picture that’s a tense watch, though not a hard watch. I don’t think a movie with this many pieces that would make us go “but how the fuck does THAT work logistically?” could survive trying to play things too straight-faced and serious.

And so James Gunn’s screenplay for The Belko Experiment ends up a double-edged sword, in how it does have a broadness to it in the mystery behind its central location – an apparently outsourced office for Belko Industries all the way in Bogotà, Colombia that is outrageously guarded with military-grade weaponry and prison looking concrete gates on the outside, though still seeing the need for indoor security headed by the casual Evan (James Earl). The also ridiculous logic behind employees agreeing to painfully implanted trackers or the building of steel doors to cover up the entire building could like wise not be entirely taken straightfaced without being a total wink at how far people are willing to go to be offered any position, though that’s just too general here already. And especially when a voice on the loudspeaker (Gregg Henry) announces to its employees that they must kill each during an allotment of time or they will utilize the explosive trackers to kill many more. It’s not hyucks, but it’s got heightened distance. If anything, the only element of the film that doesn’t seem to have an actual business atmosphere analogue is how all of the management heads, including COO Barry (Tony Goldwyn), are former military with heavy combat experience, thus having a head up on the men and women beneath them that they can kill, but overall it’s an unsubtle portrayal of competitive work environments except with physical violence instead of the downsizing and staff cuts.

And so, Gunn’s script able to sell these with enough humor behind it desperately wants to be something of a comedy and satire. Indeed, the film even includes in its large ensemble many of Gunn’s regular actors, such as Henry, his brother Sean, and Michael Rooker (Gunn remains a producer on the film and I’m sure he was slated to direct at one point). There’s also one very recognizable comedic character actor in the form of John C. McGinley. So humor is in the idea of this movie to especially sell the commentary of cutthroat office atmospheres.

And unfortunately, director Greg McLean is just not funny. 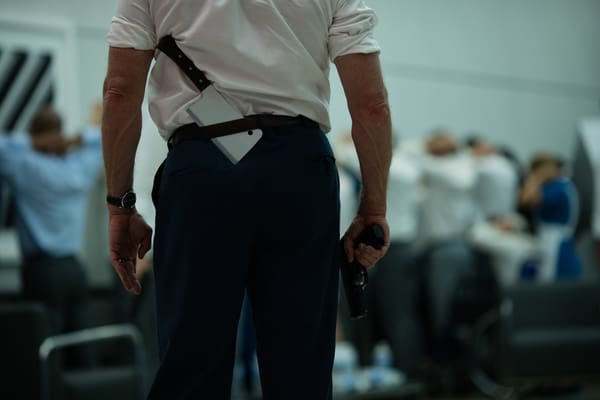 Mind you, McLean is actually a wonderful idea for a movie about the brutality of others desperately shedding each others’ blood and as a result The Belko Experiment ends up working very capably as a thriller. It should be no surprise that the director of the nihilistic and overwhelming Wolf Creek is able to carry this movie’s stakes and horrors (though I’m not certain I’d call this a horror movie). Not enough to make this into a nailbiter, but given the amount of familiarity the premise of “put people into a room and make them slaughter each other in order to make a statement” at THIS point in the decade, it’s amazing to have any amount of tautness in the atmosphere at all.

And to be quite real, McLean certainly feigns in the direction of some amount of irony. It’s hard to deny that in how editor Julia Wong uses the occasional Spanish covers of classic rock tunes such as “California Dreamin'” into a rhythm for which our hearts jump on each shot and axe to the face (Wong, easily the movie’s best weapon, also has a way of utilizing cuts just at the moment of a body part giving way to the film’s not-quite-severe gore – enough to let us see the ugly viscerality of it and sell it before she cuts to the next element of the scene leaving it still fresh in our mind when we move on).

That honestly leaves the cast themselves to be guided by McLean to turn into sweaty and harried blood-covered beings who have two particular types – those who can’t grapple with this kill-or-be-killed environment or those who are eager to just step all over their peers – and the cast, mostly fronted by either John Gallagher Jr. or Melonie Diaz (as the unfortunate new recruit) all know how to turn their bodies into collapsing alarms of panic. And once again McLean, Gunn, and Wong structure all this material into several diverging storylines so that we can capture enough of the characters to make it hurt more when we see their grisly demise, the same sort of multi-narrative angle Battle Royale perfected with the premise beforehand.

Basically, it’s not reinventing the wheel and I can’t figure out anything within it that makes it a must-watch. But The Belko Experiment is not anything less than a decent bloodletting thriller as well, short enough not to outstay its welcome and shallow enough to prevent the nihilism within it from ruining our day.