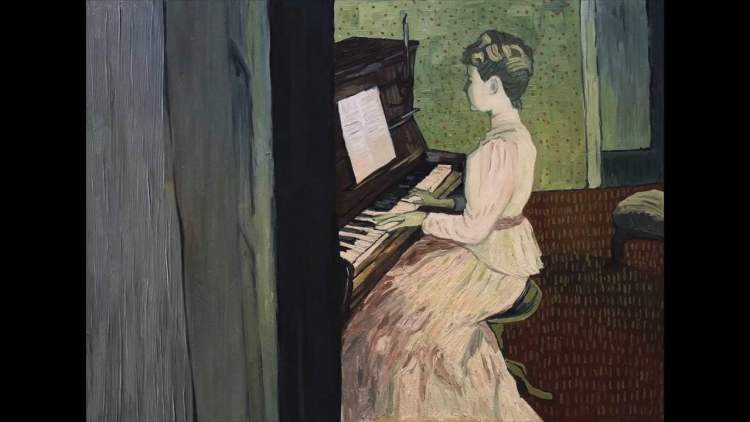 So, there is a grand ol’ two-prong consensus about the Polish animated Vincent Van Gogh crypto-biography Loving Vincent by this point that’s beaten me down since my initial enthusiasm after seeing it well back in October and it is this: On the first part, the movie is wonderfully gorgeous, absolutely miraculous to see on the big screen (and I pity those who will only have the opportunity to see it on a laptop or something at this point in their life). It has to be. For a long while it was anticipated by some (including yours truly) as a… not-revolutionary (despite the marketing’s insistence on Loving Vincent being the first of its kind) but highly unique animated experience on the basis of its craft.

Let me get the unpleasantness element out of the way first though, because the second part of that consensus deals with the content of the film and it’s an unfortunate blunt one: the script is bad. In this world of a narrative-focused cinematic experience, when you keep hearing that the script of a movie is bad, that’s a dealbreaker regardless of how brilliantly the craft is. My attitude of the script by Dorota Kobiela, Hugh Welchman & Jacek Dehnel (Kobiela & Welchman perform double duty as co-directors, Welchman TRIPLE as co-producer) is not nearly as damning, but it’s certainly not enthusiastic. 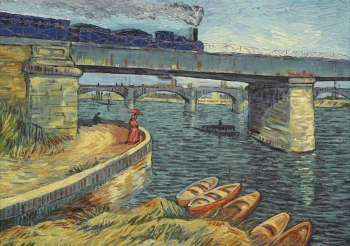 The concept of a Rashomon-esque attempt at individuals attempting to deal with the aftermath of a suicide and trying to rationalize why somebody so gifted would be brought to the point of killing himself, spurred on by the young Armand Roulin (Douglas Booth) being tasked by his postman father (Chris O’Dowd) to deliver the painter’s (Robert Gulaczyk) last letter to the art dealer brother Theo van Gogh (Cezary Lukaszewicz), only to discover Theo himself had passed away suddenly in the wake of his brother. And in his waiting game, Armand begins to take an interest in the circumstances of Vincent’s last years in suspicion of the how he died.

But I’d be lying if I said I didn’t feel beaten down by the continuous pointing out that the script quickly de-evolves, despite its attempt at structual exercise, into a cyclical series of talking heads all coming to the same dead end in how the late 1800s had no understanding of clinical depression and how because of that repetition, every inch of the movie’s 95 minutes is felt. And I understand that but the one piece of the script that really irks me (other than its overbearing coda and garbage ending credits song very labored) is how it attempts to give a finite answer to the source of van Gogh’s desperate depression and is weirdly satisfied about that answer. Given the subject matter, it feels icky to me.

So there’s that. That’s the script. If you’re a content-over-form type of person, you will more likely than not hate Loving Vincent and I’m sorry that you would. I am not at all that type of person and I found myself totally wowed and affected by the execution of the film’s core style. 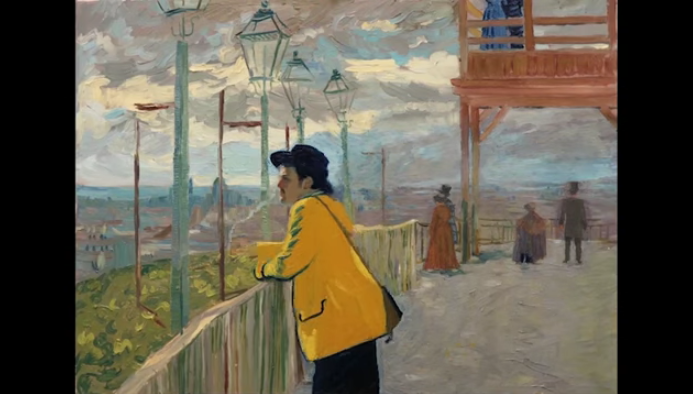 Directors Kobiela (a painter herself) & Welchmann overlooked 125 painters working on 65,000 frames intended to imitate the style of the legendary Dutch painter’s impressionistic oil works for its modern day, including pencil sketches for flashback sequences. A portion of these paintings are rotoscoped, but enough of them are from scratch to seriously impress upon anyone even slightly interested in the matter of fine art or even just the works of van Gogh (I can’t imagine how the two interests aren’t correlated though. Are there art hipsters?)

And maybe that might seem like a gimmick to some, but for someone like me who has never had the opportunity to witness any of Van Gogh’s works in person (but one dreams), seeing it on the big screen as opposed to a trailer on my computer makes me more aware of the physical element of the art short of actually reaching out and touching the thing (it’s something that makes me kind of wonder how the film would look in 3D, possibly akin to Werner Herzog’s Cave of Forgotten Dreams). It’s impossible to ignore the inadvertent contours of the art, the gloopy swirls and strokes that maps all around the frames. Kobiela & Welchmann did very well with photographer Tristan Oliver to translate that beyond the flatness of the screen, they want you to feel the depth of the lines, like the landscapes extend beyond the frame, like the portraits betray the wear of the individual’s face. And then there’s the fact that you’re witnessing this in motion. Very little of the shots are stilled in place, you are literally watching art’s textures move little by little. This is obvious in sequences where water is on-screen and most especially obvious in sequences with rain pattering on its steps. And because this isn’t really frames so much as flat-out paintings being presented as frames, you feel the shifts in colors (and idiosyncratic colors doesn’t seem to cut describing van Gogh’s works – he seems to have a dark earthy sensibility to the colors of the world and a lack of scrutiny in using different shades and the film captures that beautifully) and contours being presented more as a visual progression than standard animation’s necessity to turn movement fluid and seamless. It’s fascinating work and while I was just dismissing the marketing’s claims of it being the first of its kind, I can still happily claim that the movie is unlike anything I personally have ever experienced in a cinema.

So therein is a choice to be presented to the prospective viewer of Loving Vincent, one that certainly lives inside an audience member since they began watching movies: Are you looking for content or are you looking for form?* I mean, the answer is pretty obvious to me, given I had just recently defended Valerian and the City of a Thousand Planets, so it’s no surprise I pretty much loved Loving Vincent. Because if you’re there to see some out of the box storytelling and intelligent storytelling, Loving Vincent is incapable of making most people very happy on that end and I am sorry to say that you might be happier selecting another movie. But if you’re sitting in that theater seat** because you’re an animation or fine art enthusiast or scholar and you’re looking for something to change the way you look at the works of one of the most influential painters in history (excusing my admittedly limited knowledge of the art form), you’ve made the right choice. 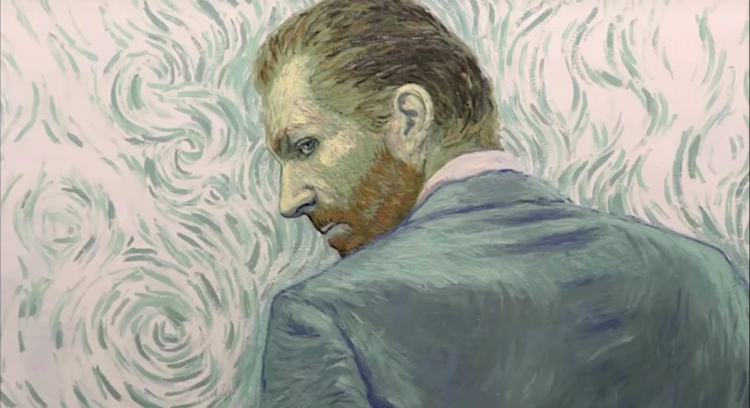 *Ignoring the understanding that in a medium as aesthetically based as film and especially animation, content IS form sometimes.