Film criticism – at least in the form of deciding on what a film does right or wrong, regardless of your admission to subjectivity – is an inherently narcissistic practice as is and when it comes down to deciding that the filmmaker in question really doesn’t get his own movie, that just makes things even more narcissistic no matter how subjective a work of art is and “la mort de l’auteur” aside on a work where you are decidedly not an authorial voice. And yet here I am, where my first thought about A Quiet Place every time it pops into my head is how director & co-writer John Krasinski (who also stars in it, lest we forget he’s an actor first and foremost; his fellow co-writers are Bryan Woods & Scott Beck) missed the extremely thin but notable line between making the film the simple yet effective monster movie thriller that it is and an exploration about the trespassing shock of noise in the midst of an atmosphere of silence.

It is not precisely a bad musical score, but it is not a very great one – resigning itself to telegraphing all the normal horror movie beats in unsubtle fashion – and I can imagine (and have encountered) those who have come out A Quiet Place finding it to be great in spite of that score, I can not imagine someone walking out finding it to be a strength or not thinking A Quiet Place would be better without it. It sucks away most of the tension like a vacuum that comes from the characters having to keep totally quiet, leaving only the basic literal tension of “most people if not all people do not want to get eaten by giant slimy CGI crab-monsters whose bodies are apparently made out of armored cochleas”. Which is still something, but a lot less experiential or immersive of an experience. And indeed, much of the praise for the film comes from the idea that it could immerse the audience into a conscious silence, but that was unfortunately not the entirety of my experience for the film (in fact, I’d say horror movies are exactly the kind that make audiences want to respond with “oh no” and audible gasps the moment something bad occurs. Which is exactly what went down in my theater, ignoring how the person I accompanied the theater with was trying to crack jokes and yeah I’m probably never watching a movie like this with him again).

Anyway, the way one gets that A Quiet Place wants to be that little “cut the silence with a knife” picture is how the sound mix consciously accentuates isolated elements of the sound as disruptive enough to make a fellow whose survival depends on it jolt just a little bit. You don’t make that kind of decision if you don’t want sound and its absence to matter in a picture like that and it’s impressively done outside of Beltrami busting in at often-unnecessary moments.

It also wants to be a movie about the importance of parental responsibility where hopelessness surrounds the world completely (as this is indeed a post-apocalyptic film where those monsters have consumed the apparent majority of the human population and establishes that with dry, desolate rural terrains) or the strength of a family in a time where guilt and finger-pointing seem to be the easiest paths to choose in a time, focusing on a nuclear family fluent in American Sign Language made up of engineer/farmer (maybe? this is a movie of ambiguous visual clues to tell us about the way life is here) Lee (Krasinski) and his wife Evelyn (Krasinski’s real-life wife Emily Blunt) and his three children Beau (Cade Woodward), Marcus (Noah Jupe), and their eldest and deaf daughter Regan (real-life deaf actress Millicent Simmonds, following her brilliant debut in the apparently underseen Wonderstruck) and their struggles to keep things together in the wake of an opening scene tragedy that sets up stakes in a violent manner (violent for a PG-13 film, you understand).

Such stakes that one would of course wonder what makes the decision for Evelyn’s apparently imminent pregnancy not look like a very very bad idea to the family* a little over a year after that opening scene (the movie takes place over two days after that scene), but nevertheless there they are preparing for the potentially noisy and definitely painful arrival of a baby into their “shut up or die” apocalypse world and it’s certainly something the actors prove to be qualified to portray with all the weight necessary to make this matter. Simmonds especially the resultant self-recrimination and frustrating lack of dialogue with his father without the slightest bit of overplaying it, given her knowledge on how to express her emotions without needing audible speech to do so.

Anyway, I guess my overall attitude on that family drama side of the material is likewise a “it’s not great, though it’s not bad either” element. Most of the emotional heavy-lifting has to be performed by its cast in the first place and it looks like at the very least Jupe is more interested into turning any moment of threatening danger into a moment of unmoving dread and fear (which he does very well). It’s perhaps the fact that the movie’s competent and frequently impressive thriller setpieces overwhelm the idea that it could ever be more than an early pre-summer thrillride and in a way, I don’t see why it should want to be more than that. I mean, even the complaint I had at the beginning of this review is more towards its function as a thriller than its possibility of elevating itself beyond genre cinema. And even with Beltrami as a handicap and a less-damaging-but-still-contrived series of character decisions and actions in the final act, A Quiet Place is directed very horror-movie-consciously in framing and pacing by Krasinski to pass itself as a worthy exemplar of popcorn cinema just before the season where we will get that dread-esque popcorn moviemaking by the dozen.

*I believe Demi Adejuyigbe said it best “why y’all fuckin during an apocalypse anyway“. 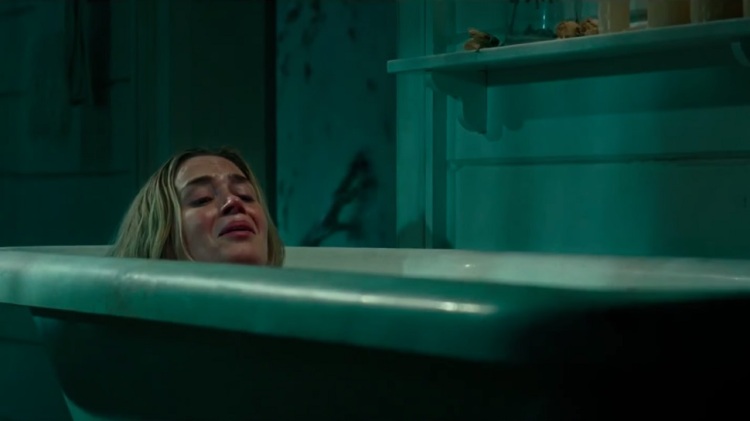