Hotel Artemis is not the sort of movie I’d like it to be and it becomes a lot less of that sort of movie the more it progresses on. And yet, there’s nothing about Hotel Artemis I can call outright bad. On the contrary, it is one of the earliest joys I’ve had of what is turning out to be a surprisingly great summer. It’s just very clear that writer-director Drew Pearce – making his feature directorial debut after writing credits for Iron Man 3 and Mission: Impossible – Rogue Nation – had a different idea of the potentials of the plot hook than I did and I don’t think what he does is much more interesting. No matter, he does what he wants to very well.

What that plot hook is: Based deep in 2028 Los Angeles with legendary secrecy (despite a hilariously eye-catching neon sign on the roof of its building), the Hotel Artemis is run by a very frazzled and agoraphobic nurse (Jodie Foster) as a penthouse medical refuge for criminals of several varieties, with the only other major staff member being her burly bruiser of an assistant, Everest (Dave Bautista). And from here, the concept could easily lend itself to a shaggy treatment at mundanity to the extraordinary premise – certainly one I would think in high demand from the popularity of the John Wick franchises’ Continental line – with a revolving door of in-patients bringing their own troubled stories without much interaction between them, but Drew Pearce has decided to things in a much more straightforward narrative line where the pieces are specifically arranged to have a large consequence by the end of the movie.

Indeed, we end up visiting the Artemis during one of the most volatile times in recent L.A. history as a riot rages on its streets and that violence threatens to break into the walls of the Artemis itself. Indeed, it’s already inhabited by a French assassin and a weary bank robber who have a tense romantic history, going by the codenames of their rooms: Nice (Sofia Boutella) and Waikiki (Sterling K. Brown), respectively. Nice is in the Artemis for a purpose she’s keeping close to the chest while Waikiki’s wounded cohort brother Honolulu (Bryan Tyree Henry) has inadvertently threatened their lives by robbing a courier’s pen holding treasures that belong to the powerful and dangerous Wolf King of Los Angeles (Jeff Goldblum in a reveal that would have packed much more punch if the trailer and poster had not already spoiled it), who we learn has a more petulantly aggressive son named Crosby (Zachary Quinto). And just in general, spoiling all the fun is an obnoxious misogynistic arms dealer codenamed Acapulco (Charlie Day), not really having much stake in what occurs but derailing things just by sticking his nose in where it doesn’t belong and spitting harsh words towards anybody who enters the same room as him.

Early on, we see how easily the Nurse keeps herself from being rattled from these sort of complications she considers routine to the 22 years she’s spent there – a personal soundtrack (“California Dreamin'” makes an early appearance and if there is a third element to make The Mamas and the Papas references hat trick, I missed it) as she preps areas and a confident reliance on strict rules, like no guns, no non-members, no insulting the staff, no killing the other patients and some others, all enforced sternly by Everest. But as we can quickly discern, Hotel Artemis is set on a day when all the rules are about to be broken, some of them in ways the Nurse was not expecting. Drew Pearce does a very solid job keeping all the pieces moving towards the climax he was aiming for with the help of Paul Zucker and Gardner Gould’s snappy cutting bouncing in between rooms treating each one as its own narrative, resulting in a well-constructed boil where these characters each with their own pressures end up responding to those pressures in turbulent fashion. There are certain plot threads that come back full circle and some that don’t, but it’s a tight enough script that every development feels like a threat and those that don’t blow up in the characters’ face feel like a result of their smart decisions or a manner of coincidence that Pearce sells.

And what makes it work just as well as Pearce would like it to is a cast that doesn’t seem to have a single false note within them. Certainly, the grand majority of them are simplistic archetypes like Boutella’s femme fatale, Bautista’s cynical tough guy with a heart of gold and three different flavors of hot-headed wreck between Henry, Day, and Quinto (five if you include early cameos by Kenneth Choi and Father John Misty), but they all play those archetypes like a fiddle and everybody has tremendous timing with each other. I’m pretty sure there’s only a single scene shared between Bautista and Day where they share one line each and it’s effortless how perfectly the characters get on each other’s bad side. In any case, it does feel like the film is aware the only characters that actually have dynamic to them are Waikiki and The Nurse and the decisions Pearce makes for the third act are very aware of this, so it’s not a surprise that Foster gives the best performance in the movie (Brown and Goldblum battle for second place for me), playing the Nurse as a bundle of nerves who attempts at professionalism are the only think keeping her from breaking down. It’s clear early on all suppressed emotions that take beat by beat to let her guard wear itself out – once again Zucker and Gould do marvels of blunting this by cutting in blown-up memories of a beach – and it’s no surprise that we’ll learn all about what pains The Nurse by the end of the film. 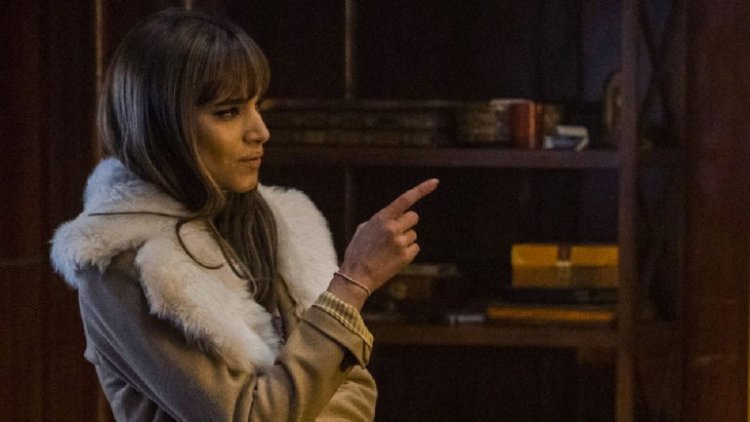 And yet all of this waxing about how well put-together Hotel Artemis is as a shallow but fun diversion narratively without acknowledging the most important character, the Artemis itself. Production Designer Ramsey Avery crafts two entirely different worlds where the outside of the building is graffiti’d rubble on flaming streets signaling the world’s collapsed while on the inside, the Artemis’ carpeted walls and aged bronze suggesting it’s merely on the way out with cinematographer Chung Chung-hoon lighting and coloring the screen with a melancholy whiskey brown darkness to both suggest Everest should probably change the light bulbs soon and that the Artemis belongs to a time long gone. Chung’s framing also favors the remnants of class respite that doesn’t seem to exist anymore except in nostalgic memories, like the mirrored bar taking up the majority of space for Waikiki and Nice’s discussion in it or Waikiki brandishing a gun in the smallest corner of a shot that is mostly a Hawaiian greeting card. Despite being inhabited by smooth plastic white screens and machines reminding us that the future’s already invaded, the characters of Hotel Artemis mostly yearn stylistically for an age long before any of them were ideally born (I can’t imagine these characters being older than a single digit age during the 1960s and 70s that the film tries to emulate), perhaps best embodied in Lisa Lovaas’ costume design for the Wolf King like some affluent Long Island vacationer, complete with leather sandals.

So, it’s a good time that wraps itself up a bit too neatly for my tastes (I would love to see a further series on how the Artemis continues on, but the box office take doesn’t seem to promise a franchise) and is a bit too dedicated to providing a full-on narrative than to live in the world Pearce and his crew have invented. That’s fine. I still don’t have any trouble recognizing that my disappointment at its approach is outmatched by the thrill I had with its trashy thriller sensibilities. Hotel Artemis is not devoid of issues but it seems to survive them just as easily as its namesake survives a night of in-patients and out-patients.