Tony Zhou’s regretfully short-lived video essay series Every Frame a Painting had a brilliant summary of the Chuck Jones method of cartoon gags based on assumption and reality. The visual setup insists on an expectation based on the set up only for the opposite to happen, often through impossible logic that only a cartoon could supply. I find that this is not a principle that is exclusive to Chuck Jones’ work on the Looney Tunes (Zhou, I assume, does not think it is either as it wasn’t the thesis to the Chuck Jones video), but actually the core of so many early cartoons since the Laugh-O-Grams if not even earlier and the foundation of which they are showcases of not only the physical possibilities of the animation medium but even how they can be comic in basis.

Now, what if that same principle was applied without the desire to be comic but instead disorienting and surreal?

I don’t believe that’s the exact thought that approached Dave Fleischer’s mind when he co-directed Bimbo’s Initiation in 1931 with Grim Natwick, but it’s impossible for me to see that 6 minute short as all that different from Alfred Hitchcock’s The Trouble with Harry, taking all the techniques Hitchcock perfected the thriller with and replacing the release of suspense with a comedic punchline instead. Bimbo’s Initiation came several decades into the existence of animation to use the fluidity of lines and spaces to twist what we expect to be a casually pleasant cartoon into something akin to a slippery nightmare for its central character, Fleischer’s rotund anthropomorphic dog star Bimbo, to tumble through. 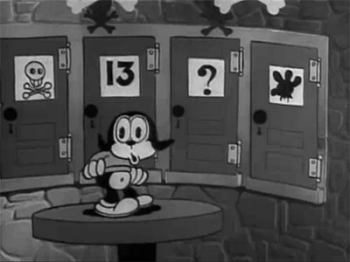 In any case, Bimbo is minding his own business walking down the street when he falls down a manhole and after tumbling down a zipping z-axis slide lands right in middle of big-bellied white sheet sack-wearing fellas who have soot bunnies for faces, candles on their heads, and all but the leader are holding 2x4s with nails in them. The leader is himself identifiable for holding a staff that is headed by what appears to be a toilet seat, which he yanks as he looks Bimbo in the eye and ribbits “wanna be a member? wanna be a member?”, an invitation that Bimbo declines with an annoyed whining “nnnnooo!”. And there begins the fun that the cult has at the expense of this poor dog, tossing him through a tremendous amount of obstacles that promise pain and death with no escape although the surrealism already began during that twisting slide and the way the end of the slide literally transformed into a mouth and spat Bimbo on the ground.

Nevertheless, most of what follows is individual gag setpieces of doom like where a piece of string holding a ceiling of spikes burns only for Bimbo to be standing right where an unseen hole was when it falls or a room spins entirely around like the hallway in Inception until Bimbo falls right into view of a knife while the floor rolls like a treadmill towards it, the knife suddenly turning shark like in its edge to lick its lip. Another and another unrealistic thing happens to throw him out of the fire and into the frying pan right up until a reassuring and absurdly kink-based finale (but a kink that is foreshadowed if one pays attention) arrives with the familiar presence of Bimbo’s girlfriend and the Fleischer’s next and most enduring star, Betty Boop (this happens to be the last film Natwick worked on with Boop, his personal creation). The repetition, endlessness, and speed in which we run through of all the perils Bimbo encounters are fundamental to Bimbo’s Initiation having a relentless nightmarish quality despite being a minute 6 minutes in length, even if it didn’t have such macabre touches as watching a shadow decapitated. And this is to say nothing of the energy provided by the constantly shivering Bimbo, which communicates his constant fear just from the inability to sit still in suspense.

Fleischer Studios had already broken out in 1918 with Out of the Inkwell showcasing the new toy by producer Max Fleischer, Dave’s brother: the rotoscope, laboriously animating action over frames of live-action film for a smooth motion, so the Fleischers already had revolutionized the way that movement was animated briefly. But rotoscoping is absent in entirely in Bimbo’s Initiation and I think through there the Fleischers and Natwick collectively found a lot more freedom that they took advantage of. There’s no live-action reference to create creatures like Bimbo and the candleheads that menace him, there’s no reference for how walls will suddenly roll up like maps or door knobs shift from one side of the door to the other. And that limitlessness takes center stage around the last minute in one animated long shots where we start on one plane of perspective with Bimbo before the camera switches to another angle fluidly and with clarity to what death he’s avoiding this time before switching once again and the z-axis is maneuvered 3 more times before we get our first cut. It’s not like the camera is sweeping around or into the obstacles Bimbo is encountering, but it is shifting spatial perspective for us in a systemic way that is mindblowing for a cartoon short so early in the medium – far preceding the Disney techniques of Deep Canvas, CAPS, and even the Multiplane. Certainly a showpiece of Bimbo’s Initiation that could not be accomplished with rotoscoping. And I haven’t even mentioned the impressive shadow work in one dark room scene.

I began this discussing expectations and reality. Expecting Bimbo to blow a candle out only for the flame to grow hands to go back on a wick or him to splash on a pool we just saw fish in only to smash into concrete is the rubbery New York Style of executing that principle. It disorients Bimbo and ourselves and assume he can’t win, thankfully assuaged by a happy ending sexy enough to defy the Production Code and make us forgive and forget everything we just watched Bimbo go through.

In any case, you can watch him go through it online. Enjoy!