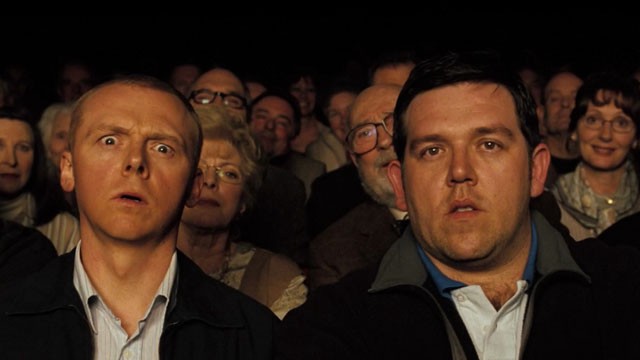 The fortunate thing about a moment in time is that it has an end. So when I come across a length of anything that is awful to experience, there’s always the knowledge that it’s not gonna last forever and that it can be put behind me too. But then again… you know how long time feels when you have to spend it with something fucking awful? Get Thee Behind Me, Shitty Movie Moments!

Anyway, I tried to pick moments of magnitude relevant to the movie surrounding them rather than just moments from the shittiest movies (ie. Birdemic: Shock and Terror – especially given how the movie is full of boring driving scenes and bad compositing of screensaver effects so there’s never just the ONE scene), which would be the easiest thing to do and not as fun an exercise. Those other shitty movies shall have their time, I promise you.

Disqualified: I have in fact decided this scene does not belong anywhere near the list and replaced it with a more deserving scene that I will not point out from the list below. Please proceed.

I’m saying the same thing everyone else said when they mentioned that The Hangover Part II was just a ripe-ass recycling of The Hangover‘s plot and humor beats. But the re-invitation of Leslie Chow as a character is where I knew I was doomed for the next hour. I honestly don’t get Ken Jeong (as a comic! As a person, he seems like a phenomenally good guy). Even at his best – Community and Crazy Rich Asians – he finds a way to feel shrill.

I promise it’s not just because you’re watching it in 2020 that the Smurfs seem to barely exist on the same plane as the real world. I’m sure I can think of one worse instance of professional actors being unconvincing at interacting with a character that doesn’t have an on-camera presence, but it’s not coming to me and I just rewatched Neil Patrick Harris lose at it.

In the words of Mean Girls, “Don’t have sex. Because you’ll get pregnant and then you’ll die.” This was wild, this was like PureFlix’s dark and gritty reboot.

It’s very hard to see Joseph Gordon-Levitt and Marion Cotillard in this movie and not find it frustrating that Christopher Nolan just wanted to reuse them for the exact same archetypes they performed in Inception but the lateness with which they decide to introduce Cotillard’s true identity in the film AND allow her to have an extensive supervillain monologue that just adds to the many many things about The Dark Knight Rises that makes little sense narratively – let alone ideologically as several viewers like to apply to it – and also curses us with the first time I’ve ever seen Cotillard give a bad performance. I wish the enclosed clip didn’t stop until after Bane goes on to give a supervillain hissy fit that doesn’t resemble anything about his character to that moment.

You’re watching this shit for the first time on YouTube probably. Imagine seeing this in 3D. The latest work of master Dario Argento, ladies and gentlemen.

I swear to God, I hated this scene loooooong before recent events made this scene age like fucking ass (granted, the long history of police brutality is a big part of why I already hated this scene). Even if we’re willing to ignore the implications of police officers being glorified for beating up a black man in his own home because “lol there’re so real broo!” (and I beg you not to ignore that), David Ayer has many times proven himself to be as lacking in grace with his action cinema as Michael Bay and Zack Snyder and throwing him a pseudo-found footage movie just adds to constant obscuration of anything except chest and Michael Peña’s face. And the movie was already fucking ugly lit, but that’s like… most of Ayer’s movies, doesn’t even need the “bodycam” shit as an excuse.

Heartbreaking to me. I love this movie a lot more than people would claim it deserves but I’m a deep devotée of Victor Hugo, the musical itself, and… honestly of Tom Hooper. And yet this is one of the few moments of this admittedly messy but still emotionally resonant movie that I just can’t defend: Jackman is fucking RUINING my favorite song in the musical. He starts at fucking 11 (aren’t the mics supposed to be on these actors? He can stand to, y’know, modulate the dynamics here) and constantly uses so much vibrato it would probably explode a soda can. I know this sounds like I’m nitpicking but it’s a pretty important song and moment to me and I just have to point out why my otherwise second-favorite adaptation (behind Bernard, baybee!) of one of my favorite books ended up falling flat for me.

I know that the Texas Chainsaw Massacre franchise has no good sequels and several that are amongst the worst movie experiences I’ve had (including this one – I’ve toyed with making a Best 3D of the 2010s list, which I don’t think will happen – but by God, this would make the opposite of that list) but surely there have to be enough devotées remaining to be legit outraged by how it’s finally taken Leatherface and domesticated him to a glorified pet with a chainsaw so that Alexandra Daddario’s character – who watched all her friends slaughtered by this beast of a man – can decide he’s actually pretty cuddly. Maybe the reason it didn’t make an uproar is because we’ve been scared off enough by the Matthew McConaughey one.

Pretty much all of Makoto Shinkai’s features have a final third act that crashes and burns with a vengeance, but this scene specifically has no peers between Your Name. and Weathering with You in “Oh my god no what the fuck are you doing?” I’m going to confess that this movie has raised in my esteem over the past few years (as you will see in a later list), but none of my rewatches have ever allowed me to brace enough for how fucking wrong-headed this entire scene is. I am tempted to use the word “toxic” about it: the age gap is already enough for pause, but the way that this kid turns to being a vehicle for something between negging and mansplaining and the movie treats this as virtuous enough to transform its Manic Pixie Dream Girl makes me feel sick. Thankfully, the movie kind of cools down in its limited time so that I can finish shuddering before the credits.

They tried really hard to arrange the music so that it sounds like epic movie music and not only is that not convincing, it’s even less convincing when it’s placed against a voice that sounds like a helium balloon losing air. I was once interested in a Clint Eastwood musical, but y’know what? Never ever ever fucking ever again.

Y’know, you wouldn’t guess it here but the first Kingsman was a pretty classy film up until about this point – very late in the game, the first half of the clip takes place in the last fifteen minutes and the second half is the outright end – and restrained itself from an sophomoric sex humor and then this happens. And I’d be less bothered if the joke was actually funny – the code to the door is the only part of the movie that I laughed at – but it’s not and all it does is continue that long line of male movie fantasies get to have sex with imprisoned women as a prize, this time with anal sex tossed in as an extra.

I mean, sure, this cat is fucking CGI but I still feel bad for it here. The way that body bends and its face morphs cannot be painless for even fake visual effects.

The worst of the Oscarbait moments from a decade full of astonishingly hokey treatments of controversial historic figures as just like the rest of us, bar fucking none. Worse than The Iron Lady, worse than Bohemian Rhapsody. It’s too visually depressed to feel as fun as it’s trying to be and the fact that we’re meant to buy Churchill in agreement with a black man and taking his “we will fight” speeches from children on the train like a moment profundity just brings out the “FUCK OFF!” in me.

The worst scene in a movie I liked, the worst scene of a year I hated, the worst writing for a woman character from a writer I otherwise dig who has long shown his ass in writing for women, and maybe even the worst scene of that writer’s entire career. Throw this sequence any possible “worst of” superlative and it fucking deserves it for how Aarok Sorkin takes one of his best protagonists puts her through some shitty dimestore Freudianism to reveal Molly Sorkin’s problem is that she hates men because her dad is a shitty husband (delivered by her dad no less). It is wild how much worse this scene gets as it goes on: the message movie hip quippery, the complete about face in tones, pseudo-psychology.

To be fair to this scene, it is the precursor to maybe The Last Jedi‘s best sequence – the Dreadnought battle complete with bomber mini-story (although the Thone Room fight is a hard contender) – but having this moment is way too stiff to be actually funny and having it be THE opener promised me that the same sort of pseudo-irreverence and lack of commitment to any moment that The Force Awakens had still survives in the rest of the trilogy. And if you really wanted irreverence, you cannot convince me that this is funnier than anything Lord and Miller would have had in Solo.

Imagine being Adam McKay and thinking you’ve made movies smarter than the Fast & Furious franchise simply because you’ve known the same things about Dick Cheney that fucking everybody alive between 2000 and 2008 already knew. What an offputting moment of contempt for your audience.

Sure, TECHNICALLY the worst scene is where Peter accidentally tries to drone strike someone with Tony Stark weapons for hitting on MJ but also I don’t think a franchise that has had one good score motif in all of the music composed for it for the past 12 years gets to talk shit about Opera, son.

The only movie moment on this list that I could not find a YouTube clip of, but take my word for it. I actually like Queen & Slim and was impressed by how far it got before it lost me but oh quickly it lost me once this moment rolled up. Some of the most “absolutely not, what the fuck is going on” cross-cutting happening I remember in a while.