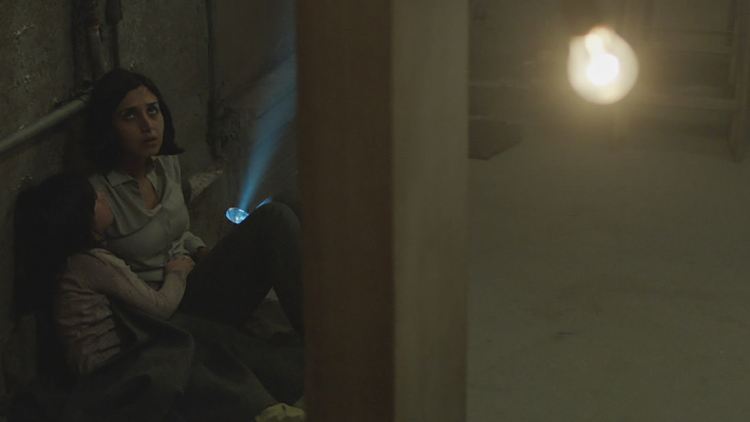 This review is in part a preview of the 2016 Popcorn Frights Festival in Miami, FL to take place over 12-18 August at the O Cinema Wynwood. The subject of this review Under the Shadow will be playing on the 13 August at 7 pm EST. More information on the festival can be found at their website and Facebook. Tickets for the festival can be ordered here.

It’s a fucking miracle for Sundance. They must feel really good about getting to be the mayor of “I Told You, STinG” Town. Long reliable as a source for mostly indie films that I can’t stand or just don’t buy the hype for since I’ve been bothering to pay attention to movies, suddenly it has given the world three of the finest horror films of the decade for three years in a row: starting with 2014 (which was admittedly a rarity – a surprisingly strong year, I would dare to call Sundance’s strongest) bringing us Jennifer Kent’s Australian spook story about grief The Babadook, last year with Robert Eggers’ Puritan-era family-in-hell nightmare The Witch (although it only just received wide release this year), and now this year with our subject Babak Anvari’s Iranian-British wartime fear flick Under the Shadow.

There’s honestly a lot of similarites I can see in all three films – they’re all outstanding feature debuts of very promising writing and directing talents, they’re all domestic-based dramas that use the tension between a broken family to punish their characters (Babadook and Under the Shadow share it being a mother-child relationship while The Witch has a whole nuclear family to destroy, although there is especially savage hatred between the leading eldest daughter and the matriarch), they feature excitable child characters who are essentially the harbingers of doom before any supernatural element enters (although The Witch promises its horrors are the real deal from the get-go, but those insufferable twins do not make things easy), their leads are frankly outsiders from their local community (The Babadook and Under the Shadow have them close to pariahs, The Witch just starts with them being literally kicked out of a settlement), and we enter their stories shortly after they lost a loved one and are in mourning. And yet aesthetically and even thematically, the three are still strongly distinguishable in their own manner that makes them indispensable genre fare and if I don’t think Under the Shadow is exactly the best of the trio, it’s because of how tight its competition is.

That outsider central to Under the Shadow, by the way, is Shideh (Narges Rashidi) and she’s the matriarch of a family in post-Revolution Tehran (dialogue in the film implies that it takes place in 1988) that frankly lives like a lot of privately secular households in post-Revolution Tehran – they have a VCR (and a Jane Fonda exercise tape Shideh works out to to really tie in how radical this family is in this atmosphere), they’re not Muslim, and Shideh drives and doesn’t see the need to wear a hijab within her apartment building. That would be enough to put her and her doctor husband Iraj (Bobby Naderi) at a difference between at least their religious superintendents the Ebrahimis (Ray Haratian and Aram Ghasemy). The fact that we open the film on Shideh being told she is banned from returning academia due to her political activism during the Revolution, preventing her from being a doctor herself, just gives us reason to know how separated she is from the rest of the city without even learning any of those other facts about them.

Shideh’s hopes on a medical career are apparently informed by the recent loss of her mother, but I may be reading a bit too much into Rashidi’s great performance – one that has a bitter annoyance with everyone who approaches her while she’s still steamed over her life and that can only bite her tongue too long before she becomes too wound up – to say that she has a particular resentment for the idea of being resigned to the gender roles of housewife and stay-at-home mother to their daughter Dorsa (Avin Manshadi), with whom Iraj has a much healthier relationship than Shideh. Unfortunately for them, Iraj has been drafted into the Iran-Iraq war that came as a result of the Islamic Revolution (Anvari’s family having gone through the same situation in his youth) and Shideh and Dorsa must live for the time being without him as the glue that keeps the family together. Even more unfortunately, the young and sensitive Dorsa is beginning to talk about seeing the Qur’an-based Djinn (I have trouble explaining them to anybody who isn’t Muslim so please bear with me… they’re beings of smokeless fire that function similar to demons without the “fallen angel” aspect of them) and while Shideh dismisses them as nightmares, Dorsa is taking them very seriously after losing Kimia, the doll Iraj gave her. Most unfortunate of all, I should reiterate THEY’RE LIVING IN TEHRAN DURING THE IRAN-IRAQ WAR while Dorsa’s Djinn encounters are occurring.

That last element is how Under the Shadow truly keeps itself working. Like all good horror films, it’s a slow burn (in this case to the halfway point) before the possibility of any monster assailing Shideh and Dorsa becomes considered a plausible situation and yet there’s a foreboding sense of danger from the very first few frames of the movie. An ominous portrait of the Shah looming over Shideh in an office like its judging her, smoke from an explosion billowing in the distant background seen through a window, tape on their apartment walls, a frequent visit to the building’s basement for the tenants if things get really scary, but it’s worse when you especially know your history – that Tehran was one of the most frequent targets of Iraq’s Scud missiles and expect everything to go to shit pretty soon. Under the Shadow is unfortunately a pure genre picture, so its screenplay doesn’t have room for much for commentary on post-Revolution Iran (which is a shame, Iranian pictures about the Revolution are hens’ teeth – a couple of Makhmalbafs and The Circle are all I know; Persepolis might count coming from an Iranian author but it is technically more a French production.). But Anvari uses that time period for more than just backdrop, it uses every possible chance it can to shoehorn this environment as threatening to Shideh and Dorsa in every sense of the word, compounded by Shideh’s refusal to leave the apartment (despite most of their neighbors vacating AND Iraj’s insistence) probably informed by that same resentment at her current life.

Hell, Under the Shadow doesn’t even have to wait for monsters to show to become heart-pounding. there’s an early scene where Shideh is fighting to save a man’s life with what medical training she has after he’s had a heart attack from a Scud missile landing but not exploding right in his room and Shideh’s efforts occur in the same room. In a single agonizingly long shot, we have Shideh trying to do what she can but the missile is literally sitting there with more lighting and focus on it so our eyes are on it anyway and just peripherally aware of Shideh’s attempts. We’re just there watching the missile waiting for it to explode, no cuts, no camera movement or change in blocking. It’s a remarkably minimalist attempt at constructing tension on Anvari’s part.

The biggest aid to making this atmosphere of living in an oppressive war zone work to Anvari’s benefit is how absolutely tired the whole thing feels, from the bland and deadened browns and blacks of the family’s apartment that take up the film (courtesy of cinematographer Kit Fraser and production designer Nasser Zoubi) to the casual manner that characters regard their unfair living circumstances (including the death of a relative) to most of all Manshadi’s performance. Manshadi can play scared like all children, but her main demeanor throughout the movie is a kind of neutral melancholy at living with the more severe and grumpier parent of the two and once Dorsa starts suffering from a fever halfway through the film, Manshadi becomes a lot slower and takes more time to be expressive of herself and it’s so effective it made an 83-minute film feel stretched out in all the right ways.

If this review sounded like it was a lot more focused on the set-up part of the film, than the actual frightening pay-off, it’s because Anvari is patient enough to really backlog much of the scares (with some movements and jumps effectively staged by Christopher Barwell to enter shots right before something bad happens plus a hell of hollowed-out sonic tone to the building) to the latter part of Under the Shadow and efficient enough to know when the film should simply bow out (again, 83-minutes is not a lot of time). Some people may find that lopsided in structure, but I think the journey to that finale is too compelling a watch to hold that against Anvari in the slightest, I wouldn’t have it any other way, especially when it lets us keep certain facts about the lore in our mind so that the ending shots are ambiguous in the most alarming manner.

I already had a feeling I was going to like this movie. I am simply a sucker for Iranian cinema (like, I’m literally going to see an Iranian film later today as I said in my instagram) and I’m a sucker for horror based in the psychological and immaterial. But those could still easily go wrong one way or the other and I call a spade a spade and a damn good horror film a damn good horror film. Under the Shadow is a really damn good horror film, one that I can’t wait to watch the rest of America slowly be exposed to, continuing to herald the surprising quality in modern horror films coming from the turn of the decade.